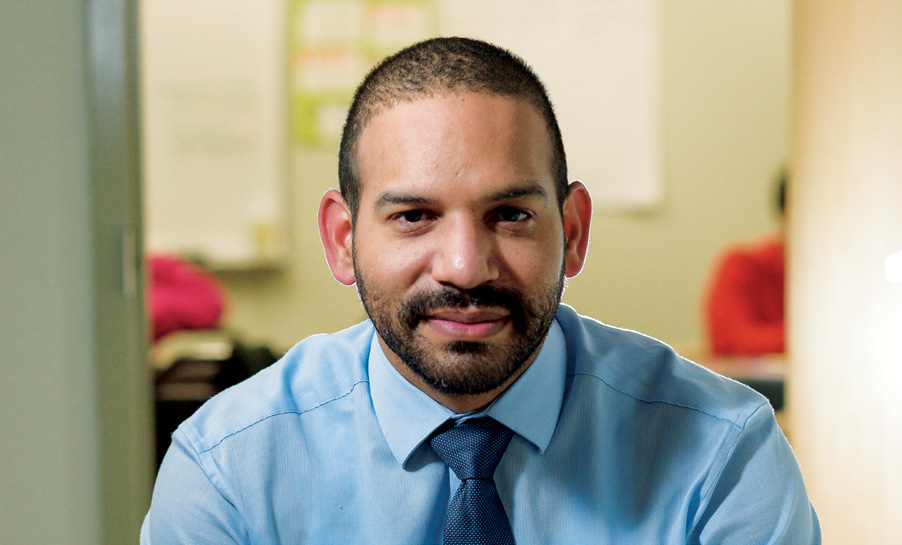 As an international relations major at Tufts University, Omar Longus ’04 had clear and ambitious goals. He wanted to be a foreign service officer and work for the U.S. State Department, serving his country and making a difference in the world. After Tufts, his next step would be to attend law or business school. But during his senior year, his father passed away, which was challenging. Two years later, his brother died unexpectedly. Omar was unmoored by those losses.

“It just threw all my plans for a loop,” says Omar, who returned to his hometown of Salem, Massachusetts, after graduation. “What got me out of that funk was literally my mom telling me I had to start something and encouraging me to look at Salem High.”

Both of Omar’s parents had been educators who held multiple degrees. His father, originally from Washington, D.C., had been a professor at Salem State University,
where he taught in the School of Social Work and founded the Institute for UnDoing Racism. His mother was from Colombia and a longtime, now retired, guidance counselor at Salem High School.

Omar started substitute teaching at the high school, where currently about 46 percent of the 916 students come from low-income households, and 13 percent have limited proficiency in English. He followed up his work as a substitute teacher in the school’s culinary arts program, where a Junior Reserve Officers’ Training Corp director noticed his fluency in Spanish and asked him to become an English teacher of adults in a program for students’ families. Many of the families are from the Dominican Republic or other Spanish-speaking countries, but Salem has residents from all over the world. This night class would be Omar’s first taste of teaching. 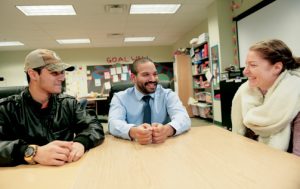 “This is when I started to realize that the things I wanted to do as a foreign service officer, such as travel to new places, work with different kinds of people, learn new languages and different cultures, were right here in my backyard,” Omar says. “I could do that work here.”

One night in class, Omar mentioned that elections were coming up and reminded his students to vote. One student asked if it was an important election. “That set off a red flag in my head,” he says. “I had to say, ‘Every local election is important, because these are the things that will impact your life in our community.’ Then we debated whether it was better to think locally and act globally, or think globally and act locally.”

Omar had always envisioned his brother as the one who would stay put, and that he would be the one off traveling the world. “But when he was gone, it anchored me here,” Omar says. “I realized there was a lot of need in this community and that these needs are important to me, so I should be here.”

Omar didn’t immediately change his career plans. He was still thinking about that foreign service job and planned to attend business school. While Omar was studying for
his GMAT, the Salem High principal asked him to sub in some of the student ESL classes for a couple of days.

“Well, a couple of days became a couple of months,” Omar remembers. “Because I was an inexperienced teacher, I turned to a lot of people for help. One of them was an administrator who helped me out in the classroom. One day when I finished, she asked, ‘Hey, have you thought of being a teacher?’”

She told him about a grant program at Salem State, where he could earn a master’s degree in education for free if he committed to teaching in one of the program’s partner communities. Omar decided to enroll, and as he was finishing up his master’s degree, Salem State asked him to stay on and run the Project SAEL (Successful Advancement of English Learners) grant program to help local teachers receive licensure in ESL. He agreed and began to run the program while also fulfilling his student teaching requirement; afterwards, he stayed on for the duration of the five-year grant.

Today, he is an ESL/science teacher at Salem High School. His days start early and end late, and during almost all of that time he is interacting with teenagers. Outside school, he is involved with the nonprofit LEAP for Education as a program facilitator for Brothers for Success, a peer support group for males of color. He also serves on the board of the Salem YMCA and is working with a small group of community organizers to launch a nonprofit called Within U that focuses on the 18-to-24 age group.

At Salem High, some of his coursework includes the “newcomer program,” which is set up for students beginning to learn English skills who are new to the school and are often new to the United States. In a couple of the biology classes, he is the language specialist and co-teaches with a content specialist.

On this particular day, Omar stands at the door and greets students on the way in, checking in with each one: “How are you doing today?” Many of the students are low-level English speakers, and although it is a freshman class, some of the newly arrived students are older. It takes about 15 minutes for the class to settle in, because seat assignments have been rearranged — a regular routine throughout the year — and some students are not happy.

Omar is a calming presence, walking between the tables, quietly speaking one-on-one with some students in a mix of Spanish and English, while the other teacher starts discussing the class material. Many students are engaged in learning, but one group of boys is not. They are disruptive, but Omar remains calm. At times he pulls one or another out into the hallway for a discussion.

Throughout the class, he never raises his voice and uses a variety of approaches to get the students to focus on their work, helping them understand the material or pointing out why their behavior is unacceptable. Between the moments of distraction, learning is happening. After class, Omar and the other teacher debrief. This is one of their most challenging groups, but they care about each student and discuss future strategies.

Not all the teens Omar works with, either inside or outside school, will go on to four-year colleges or even receive their high school diplomas. Omar tries to meet each teen where they are; he knows he can’t fix every problem. People, particularly students, can feel pressured by expectations set by others and by society, he says. “They think ‘My life is only going to be fulfilling or successful if I check these boxes.’ As I’ve gotten older, I’ve realized you can create the boxes you want to check. If you ask society to create those for you, you’re never going to be rich enough, or you’re never going to be successful enough.”

After his school day ends with the chess club, he turns his attention to his other work. First is a meeting in a vacant barbershop with the Within U team. They are a passionate group in the early stages of launching the nonprofit, discussing their mission and vision statements. Their hope is to fill in the gap as young adults start to make their way in the world. 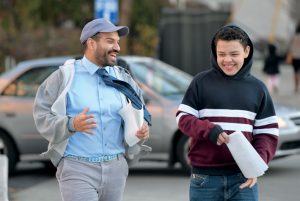 From there, Omar heads over to LEAP, in downtown Salem. Part of LEAP’s mission is to “empower first-generation-to-college and underserved youth to engage in their education, graduate with a post-secondary degree or credential, and succeed in a career that matches their strengths, interests, and values.” Teens are hanging out in a common room, waiting for others to arrive to start the movie The Martian (subtitled in Spanish) as part of STEM Week in Salem. It’s a comfortable space for older kids, with popcorn and beanbag chairs. Omar seems to know each teen and gets pulled into various conversations.

“At a place like LEAP, I might see a student master something that isn’t part of the school curriculum, but will make me feel like ‘Oh, wow, this person is able to shine in this way, in this place.’ Those are the things that keep me going in this work. The work is meaningful, but it’s also fun.”

Linda Saris, LEAP’s executive director, who has known Omar for many years, relates a revealing story about the dedication he brings to his work. When Omar first started volunteering, he was doing a lot, but she could not afford to pay him. Finally, she was able to get a grant to support their efforts and gave him a check for $1,000 as a stipend. Omar took the check, cashed it, and brought the money back to be used as petty cash for pizza, movies, field trips, and so forth.

Omar’s final stop for the day is a board meeting that evening at the YMCA. It is a busy, vibrant place that runs and supports numerous programs in and around the city.
“I love the Y,” Omar says, “because they mesh both the heart and the hard work that is needed to care for the community. It is a strong organization with strong principles, but at its core, it’s a lot of people with big hearts who want to help their communities. The things I tend to invest my time in fit that mold: It has a solid structure, but it’s socially driven and it involves community empowerment, youth empowerment, and uplifting people.”

Finally, sometime after 8 p.m., Omar can go home and unwind. He says he’s been working on finding more downtime to hang out with his friends, practice hot yoga, and do the other things he enjoys. But his work is also his enjoyment. If it weren’t for the Y board meeting, he would have been content to hang out at LEAP with the kids and watch the movie.

This work, says Omar, is as “meaningful and important to me as if I were working at the highest level in the State Department. People who mentored me and who put a lot of work into their local community are not going to have the same publicity or notoriety as someone like a secretary of state. If that is your goal, that’s great, but at the same time that’s not the end-all. You can do service work in a local community and find that very meaningful, compelling, and valuable to yourself, and also to the people around you.”

To learn more about the Salem YMCA:
northshoreymca.org

To learn more about LEAP For Education:
leap4ed.org