Upper School: A New Direction for the Transition Program 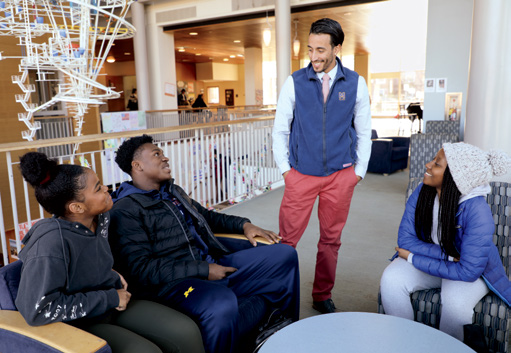 At the start of the school year, in August, Milton’s Transition Program, a community-building program that has provided a foundation for new students of color and international students for more than three decades, broadened its focus to include all new Upper School students. The change to the program resulted from Milton’s commitment to creating a more informed, culturally competent, and inclusive community.

“We made these changes in order to build an Upper School community that’s defined by certain habits of heart and mind,” says Principal David Ball, “and the best time to begin building that culture of inclusivity and mutual respect is when students first arrive on campus. It’s the first thing they hear and it’s the first thing they do; it’s foundational to who we are as a school.”

The orientation program’s evolution comes in part as a response to students of color and international students who have expressed a need for all students to share in self-assessment and cross-cultural work. “The onus to address culture should not be placed on students of color and international students,” says Heather Flewelling, K–12 director of Multiculturalism and Community Development, about the decision to restructure the program. “We’re all in, all of us. We had to work as a larger community.”

At the same time, recognizing the unique challenges that students of color experience in the School and the world, the new program will continue to provide space and time throughout the year for ongoing conversations and connections. At the start of the weekend, students of color and international students also participated in a one-day immersive program.

“The change to the 35-year-old program shows that Milton Academy is committed to ensuring that students of all backgrounds have the time to explore topics such as identity and culture while celebrating the things that make us unique,” says Ilan Rodriguez, director of Student Multicultural Programming. Ilan led the redesign of the new program. 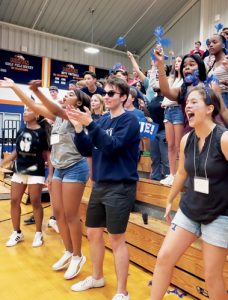 The new students — both boarding and day — were assigned to family groups and lived on campus. The main thrust of the program was to introduce them to the language of identity and culture and build a familiarity and capacity for cross-cultural conversation and connection. As part of the program, students participated in a series of affinity-group discussions around issues of identity and culture. Topics ranged from race, religion, and sexual orientation to socioeconomic status and privilege — sensitive subjects that are often hard to discuss.

“These are conversations that can be difficult,” Ilan says, “but when we have them in a safe space, students see how powerful and important it is to share, learn from each other’s experiences, and explore how we can be allies to one another. Our goal is for students to come away thinking, ‘I belong at Milton Academy. I am seen. My voice matters. My lived experiences may be different from my peers’, but there is more that brings us together than what sets us apart.’”

The program also emphasized the importance of creating time and space for relationship building among the students. In addition to the serious topics, they were able to meet with advisors and class deans, engage in team building exercises, and enjoy a lively pep rally.

An important component of the program was the expansion of the student mentor group to guide and support the new students. More than 30 juniors and seniors were chosen on the basis of their proven records as student leaders and on prior involvement in cultural and identity programs. Parental engagement was another important feature of the program. “We wanted parents together in the same room to engage in conversation about why this initiative is important to us as a school community and to remind them that their child is a part of this journey,” Heather says.

In response to a survey sent after the event to all new students and their families, which requested feedback on tools they may have acquired by participating in the program, one student replied, “My voice. Using my voice to advocate from the platform I was born with for those who need help in advocating for what they believe in. Everyone deserves an equal voice and should be heard.”

The program was merely an introduction to how Milton positions itself around its principles and practices concerning social and cultural identity. Recognizing the need to provide continued connection and conversation among students, the organizers have planned ongoing affinity discussions, workshops, and retreats. 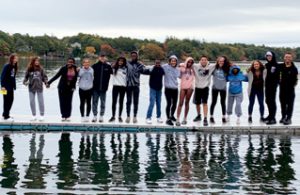 In October, approximately 50 students of color and international students attended a weekend retreat in Plymouth. It was an important opportunity for students of color and international students to reconnect and share their thoughts and feelings early in their Milton experience. “The more students get involved, the more they will understand the importance of this shift and why their support is vital to Milton’s advancement,” Ilan says.

The first phase of the new program was a success, say the program organizers, but there is always room for improvement. Program evaluations will continue to ensure that “we are listening to the voices of students, while also committing to the larger goals of the school,” Heather says. “This work is not easy, but work that seeks to shift culture, support students, and build a tighter community is something worth taking on.”

“To be honest, at first I was quite frustrated by the change to the Transition Program, because as an international student, I know how important it was to have had that week to get used to living in a new space — to get used to the quirky things that we weren’t used to having happen. However, after participating as a mentor in the new program, I think it might be a good change, because Milton can now show all of its students what it believes in. Now all incoming students learn what Milton’s about and what it means to be a part of this community. There have been a lot of conflicting opinions about the new program, from “This was an amazing experience” to “We should change it back to the way it was.” My biggest observation is, let’s see what happens. I don’t think we can draw any immediate conclusions, because its impact is so long-term. It’s still to be determined what we’ll see.” — Stefan Aleksic ’20

“As a mentor, I learned the importance of listening — of truly listening and of really understanding that everyone arriving at Milton comes from very different backgrounds in terms of how much practice they’ve had with having conversations around diversity, equity, and inclusion. I learned that people are going to make mistakes and that that shouldn’t be a reason to shut them down or be negative. It’s important to recognize that if people want to learn, that’s something to be celebrated, even if they do make mistakes. As a white transition mentor, it was so hopeful to see how many of the new white students were eager to learn. This would be their first experience of being asked to have difficult conversations. They want the Milton community to be better, and that was good to see.” — Ali Reilly ’20

“The new Transition Program is beneficial for a lot of students. It raises conversations earlier than they would normally be raised, and it’s particularly helpful for white students to hear from students of color about the environment they’re about to enter and about what’s OK to say and what’s not OK to say. Having participated in the old program, the one thing I’m still struggling with is how important it was to students of color who were coming from extremely different backgrounds. I know taking part in that program changed their Milton experience as a whole. I’m not sure the new program strikes the right balance between the time the students of color need to have together as a group and the time when all the new students participate. Striking the right balance still needs to be resolved.” — Brian Bowman ’20

“We need a cultural shift at Milton, and this program is a crucial step in the right direction. Including all new students in discussions around issues of diversity, equity, and inclusion will initiate and continue that change and emphasize the value Milton places on this work. In the next few years, as all new students have the chance to participate in the program, the impact will become even more discernible.”

“The memories I have of the Transition Program as an international student are of hanging out with a group of vibrant friends. We had a lot of fun. But it was also a bit scary for a lot of us, because the program was so different from what was to come. The new program provides students with a more solid transition between the program and the actual Milton experience. Some students have felt a bit pessimistic about the new program, asking, “Why do we have to do this?” I think the cynicism will die down a bit if we see that the program works and brings the community together. A bit more free time and some of the more fun aspects of the old program could really help to coalesce some of the more serious aspects of the new program.” — Andy Zhang ’21

“When I participated as a new student in the Transition Program, it was only for students of color, and it was definitely effective in helping me create bonds with other students of color. It helped me form the friendships that I still have. However, there was this very visible divide back then between the program folks and the students who were white, and it was unsettling. The new program makes it easier for students of color to integrate. Since all new students participate, students of color are surrounded by people who don’t look like them, and it gives them the opportunity to form friendships with people that are based on more than race. It’s helpful to be able to pick who you want to be friends with, not just because they look like you but because you like that person. That’s the advantage that the younger students have. For me, my friends were based on who looked like me.” — Bella Lora ’21