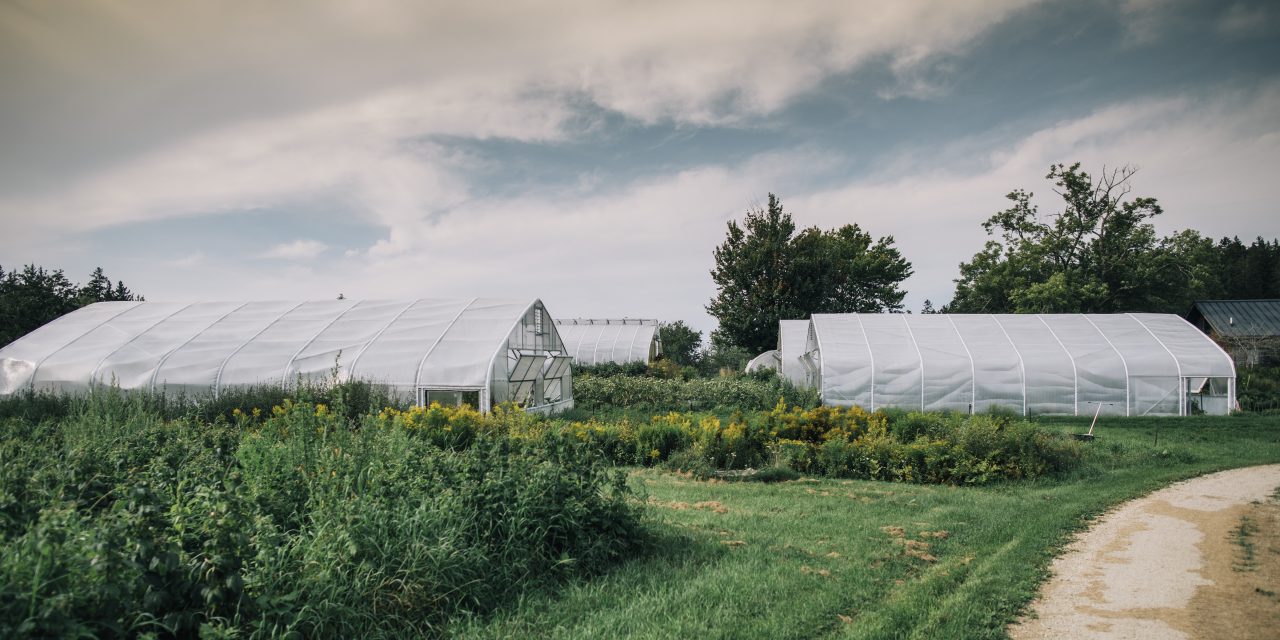 THROUGH PERSISTENCE AND A LOT OF HARD WORK, SMALL-SCALE FARMERS
CLARA COLEMAN ’94, IN RURAL MAINE, AND MOTHER AND SON JANE (LYMAN) BIHLDORFF ’65 AND DAVE BIHLDORFF ’97, IN CANTON, MASSACHUSETTS, ARE
FINDING WAYS TO CARRY ON A FAMILY TRADITION. 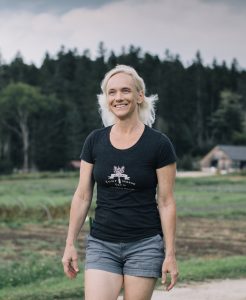 Winter in Maine is just wrapping up in April, and the land is muddy and barren. But step inside one of the greenhouses at the Four Season Farm, in the village of Harborside, and you are surrounded by rows of bursting green leaves. CLARA COLEMAN ’94 pulls a beautiful bunch of carrots out of the soil, washes them, and hands one to her visitor to taste the sweetness.

Her parents, part of a “hippie back-to-the-lander scene,” moved to the middle of a spruce forest on a peninsula jutting out into Penobscot Bay in 1968. They built a small farmhouse with no running water or electricity. They slowly carved out gardens. In 1976, Coleman was born at home, the youngest child in the family.

“Being born on this farm, I absorbed everything about the land, the surrounding nature, and the work my parents were doing. I like to say I grew up learning farming through osmosis, absorbing all of that information and knowledge,” she says.

Farming in New England is challenging. There is the unpredictable weather, the short growing sea- son, the physical isolation, and the rocks—so many rocks. But for many small family farm owners, including the three alumni featured here, it’s a way of life—one they didn’t at first consider, but came back to. And as the younger generation learns from older family members, they are also thinking about and introducing new ways to keep these farms sustainable for future generations.

“I have so much respect for farmers who grow vegetables and make it their living,” says DAVE BIHLDORFF’97, business manager of his family’s farm in Canton, Massachusetts. “Most of them are sacrificing a lot to do that. Because how can a small farmer compete with Wegmans or Whole Foods? It’s a massive food system structure that makes good food seem cheap. It doesn’t reward smaller farmers doing things on smaller scales or that are not mono- cultures.” 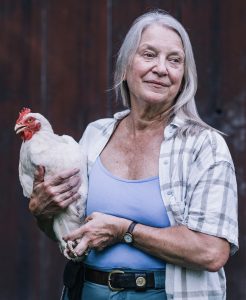 Pakeen Farm is a rolling field and forest oasis in a busy suburb 10 miles outside Boston. JANE (LYMAN) BIHLDORFF ’65, Dave’s mother and owner of Pakeen with her sister ELIZABETH LYMAN ’74, grew up on the now 120-acre farm that her great-grand- father established in 1899 on roughly 450 acres. Until 1993, it was run as a hobby, or “gentleman’s” farm. Jane’s father, Charles, was a Harvard professor and research biologist during the week, but weekends were all about the whole family working the farm. They had horses, pigs, dairy cows, chickens, and gardens.
After Jane graduated from the Girls’ School, she married JOHN BIHLDORFF ’63 while in college at Tufts University. For many years, they moved around with their three children in both Canada and the United States for John’s career as a hospital administrator. But in the early ’90s, when her husband’s job moved closer, Jane returned to the farm with her family to help her parents out.

“It was very clear, to me at least, that the farm was no longer sustainable,” she says. “It was under constant threat from development. It needed to change. So the first thing I worked to do was to put a conservation restriction on it. It was a very thoughtful and long process in which I involved my whole family.” They partnered with the Trustees of Reservations and established a privately held conservation restriction on the property, ensuring that the land would remain natural, scenic, and undeveloped. Jane’s other significant change was plant- ing Christmas trees, a more forgiving and hardy crop than, say, lettuce. Meanwhile, Dave was attending Milton, starting in Grade 7. When he went off to Wesleyan University, he was not thinking about living life as a farmer. He pursued a career in sound design for film. 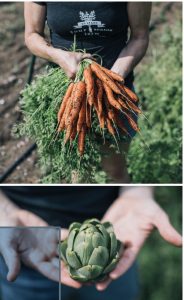 Coleman, too, sought a different life after Milton. Her parents had divorced when she was young and left the Four Season Farm for a time. Her father, Eliot Coleman, worked at Milton Academy’s Mountain School in Vermont, where Coleman spent the majority of her childhood years, with the outdoors as her playground, before coming to Milton.

“I never thought that I wanted to farm,” she says. “I loved nature and plants. My interests were based more around botany. When I went to Milton, I loved the learning experience there—the curiosity and the motivation. It was this whole new environment from where I’d come from, which was incredible for me.” Coleman says she didn’t feel the call to immediately go to college, so she “wwoofed” (worked on farms) around Australia and New Zealand. Then, after starting college in Maine, she felt the pull of adventure out West, eventually landing in Aspen. She met her then-partner, and they took over his family property and started a farm. Meanwhile, her father and his second wife, Barbara Damrosch, had returned to Four Season Farm, where they produced vegetables year-round. The farm became a nationally recognized model of small-scale sustainable agriculture.

The farm that Coleman started in Silt, Colorado, “emulated and replicated everything that my dad was working on at his farm,” she says. “We had movable greenhouses and we grew year-round. We were pioneers of winter farming out there.” After she and her partner parted ways, she started farm consulting back in Portland, Maine, in 2012. She also worked on a project to sup- port small-scale farmers, envision- ing a collaborative farming model in which farmers could share the costly infrastructure.

“Farming as a profession is very expensive and difficult in the start- up phase,” Coleman says. “Plus there is excessive work and demand on your time and resources that some- times feels like the whole family farm model is flawed.”

After she lost out on her project’s bid for a piece of land, she realized that “great ideas can always wait, but great people can’t,” which spurred her to move back to Four Season Farm. “Here I was, trying to focus on this outside thing, when I hadn’t even looked at my own family farm and legacy.” 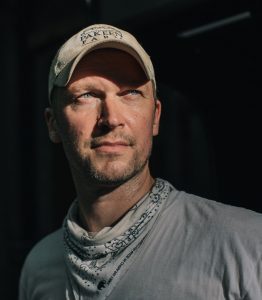 Dave was married when he started thinking about returning to his family farm. But first he earned his MBA at Boston University, because he wanted a solid business background.

“I spent time while doing the MBA,” he says, “thinking about what else can we do that not only represents a business profit that’s going to help the farm, but is in balance with what we want this farm to be for ourselves? What sort of things don’t just completely take away our special place and make it a golf course or an amusement park, but can be consistent with our values. And that’s pretty hard to do, honestly.”

He and his wife, Carolyn, moved to the farm in 2008. “The mission was to find a way to make the farm more sustainable in a business sense. We had the sustainable goals of how we practiced farming, of course, but the sustainable part that was more urgent was financial. How do we make it so that I can raise my kids here and have grandkids here too, and not just have to let it go because we can’t afford it?” 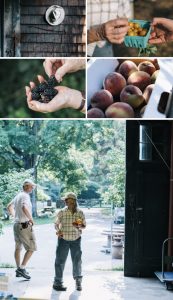 Today Pakeen Farm is part of a multi-farm CSA that runs June through November. The Bihldorffs have high tunnels, a winter green- house, and vegetable and fruit gar- dens, and collaborate with Vermont farmers who have more acreage devoted to vegetables. When Pa- keen customers show up for their shares, it’s in a beautiful barn built in 1902, with corn piled high in a vintage clawfoot tub and a donut wagon stationed out front. Before Christmas, customers pick out their trees in the fields. Dave has helped Jane transform Pakeen into an experience where people can enjoy the towering pines and fresh air. He planted an apple orchard, still in its early stages, which he hopes will become part of that experience someday. He is also working on a kitchen in a trailer that is parked next to the barn.

Coleman returned to Four Season Farm in 2016. “It was a slow transition of first trying to be really humble and respectful in observing everything that my dad and Barbara had done here,” she says. “And then finding what I thought needed improvement and change. I also felt it was important to figure out a way to create better work-life balance, and to make more of a traditional work- week with limited hours.”

Today, Four Season’s farmstand runs for only two hours on Saturdays, and local and summer residents come from all over the peninsula to buy the fresh vegetables. The farm also sells to a local food co-op and a few restaurants.

“Farming with your family—or any business with your family— is definitely hard,” says Coleman. “There’s been a lot of learning on my part and on my parents’ part. It’s not all sunshine and roses. But it’s completely worth it.”

Jane says that she and Dave have similar dispositions, which helps as they navigate the difficult work and changes the farm must make. Despite all the challenges, all three farmers’ faces light up when they talk about their land, their crops, and their way of life.

“When the season starts to change, you’re suddenly out of time and way behind on things,” says Dave. “But when I plant seedlings, whether it’s a pot or the ground, every year, I don’t think they’re going to come up. Like there’s just no way this is going to work. And then they start to emerge and they start to grow. And that’s just a really good feeling.”