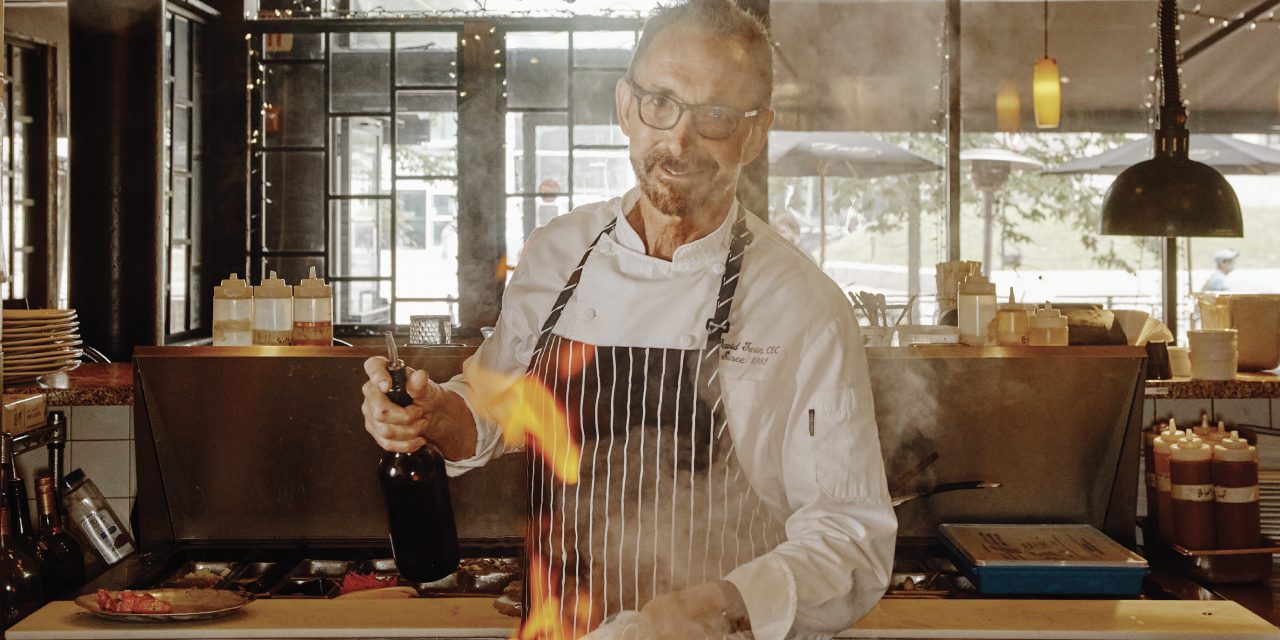 THREE CHEFS TOOK VERY DIFFERENT PATHS TO RUNNING
A KITCHEN, BUT ALL HAVE A LOVE FOR THE PROFESSION

As far back as he can recall, DAVID TURIN ’76 (photo above) loved reading about the lives of chefs—how they would spend their days at outdoor mar- kets carefully choosing the freshest produce for the dishes they would prepare later that evening.

“I remember reading about a chef who spent his afternoon riding his bicycle up into the Pyrenees on his way to his restaurant,” Turin says. “I’d read these life stories about chefs, and I knew it was for me.” Today, Turin owns three of the most popular restaurants in Port- land, Maine: David’s, Opus Ten, and David’s 388.

The chefs ABIODUN (OLA) AWOG- BORO ’93 and NICK DIGIOVANNI ’15 may differ from Turin in their culinary paths and practices, but they all share a love for food and cooking. And for all three, that appreciation began when they were young.

“I was the kid who hung around while the parents and aunts were cooking,” says Awogboro, sous chef at Comfort Kitchen, a restaurant dedicated to and inspired by the Af- rican and Asian diasporas, which is scheduled to open in its permanent location in Dorchester in early 2022. “For me, cooking is freeing,” Awogboro says. “More than anything, it’s about the act of taking raw ingredients and turning them into something that I put on the plate. To me, that process is amazing.” 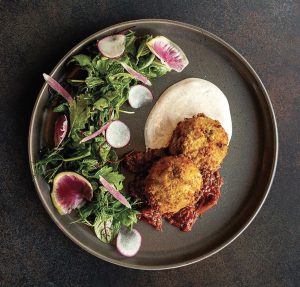 SOUND ADVICE Feeling burned out after 20 years in education, Ola Awogboro turned to his Nigerian-born father, Olalekan Awogboro, for advice about what might come next. “You’ve spent all these years in a career that you loved,” his father said, “but it was hard. What you should do now is find something that will make you happy and turn it into a career.” Today, Awogboro is the sous chef at Comfort Kitchen,a restaurant dedicated to and inspired by the comfort foods of the African and Asian diasporas. Plans are for it to also be a gathering place that offers a variety of educational opportunities. One such enterprise in the works is a cooking series called Dining with Daddy, which features Awogboro in the kitchen with his two young daughters, eight-year-old Adenike and four-year-old Adesewa. A single father with limited time, Awogboro wants to inspire other fathers to cook with their children as a way of both staying close and teaching them an important life skill. It’s also a way of passing along sound fatherly advice from one generation to the next.

DiGiovanni, the youngest-ever finalist on Master Chef, who today shares recipes with his millions of followers on social media, was also surrounded as a child by a family of cooks. His Persian grandfather taught him how to make tahdig, a crispy rice, and he loved watching his Italian grandmother prepare meals of pasta and other popular Italian dishes.

“I started falling in love with the art of cooking and seeing how exciting it was to be able to make food and feed it to people and watch them light up as they ate.”

All three chefs also share a willingness to take risks to do what they love. For Turin, it was opening his own restaurant. After graduating from Cornell’s School of Hotel Ad- ministration, he spent a few years honing his skills as a charter boat cook; apprenticing with Michel Fitoussi, one of New York City’s most respected chefs; and cooking at several Boston-area restaurants.

At just 25, Turin decided to open Santé, a French restaurant in North Plymouth, Massachusetts—the first of 12 restaurants he would own and operate over the years. Looking back, he describes his young self as having “not a teaspoon full of sense.” He recalls: “I had this little French restaurant on the South Shore in the middle of nowhere.” It wasn’t long, however, before Santé was discovered, earning high praise from the Boston Globe, and Turin’s career took off.

For Awogboro, choosing to become a chef meant starting over after a 20-year career in education. After graduating from Tufts, he rose through the education ranks—from teaching assistant at the Benjamin Banneker charter school in Cambridge, Massachusetts, to dean of students at the Edward Brooke Charter School in Boston—before deciding to switch careers (see sidebar “Sound Advice”).

Nine months after enrolling at the New England Center for Arts and Technology, Awogboro graduated as valedictorian. Today he is part of a creative new venture that is bringing the food of the African and Asian diasporas—in Africa, Asia, and India—to the table.

“These are foods that would have been your typical house food,” Awogboro says,“but we’re elevating it in the way that it’s plated, in the way the seasonings are blended, in the different types of ingredients that we put together.”

Immigrant-, woman-, and Black- owned, Comfort Kitchen will be both a restaurant and a community hub, with space for pop-ups and numerous educational programs.

“LET’S MAKE SALMON!”
Dropping the salmon onto a cutting board and flipping his chef’s knife into the air, Nick DiGiovanni ‘15 exclaims to his millions of TikTok followers, “Let’s make salmon!” In under a min- ute, he effortlessly filets the salmon. Spooning butter over the fish sizzling in the pan, he tops it off with a squeeze of finger lime—or “lime caviar.” Taking a bite, he says, enraptured, “That is the best salmon ever.” DiGiovanni’s social media fame brings him unforeseen opportunities al- most daily. “Every day right now for me is so different,” he says. “I wake up literally not knowing what’s going to happen next.”

For DiGiovanni, the turning point came when he was a freshman at Harvard and uninspired by any of the concentrations offered. He decided to take a chance and propose one centered on food. After his first proposal was rejected, he refined his submission, and on the second try, his concentration in Food and Climate was accepted.

In a second leap of faith, in the second semester of his senior year, DiGiovanni auditioned for FOX’s hit show Master Chef. Requesting a three-month leave from school, he moved to Los Angeles and became the youngest finalist in the show’s history. He also became a social media sensation who today has 7.2 million followers on TikTok (see the sidebar “Let’s Make Salmon!”), 3.2 million on YouTube, and more than 820,000 on Instagram.

For those in the food industry, the past 18 months have been singularly challenging. Turin, Awogboro, and DiGiovanni were no exception. Turin had to close David’s for two months and both Opus Ten and Da- vid’s 388 for more than a year.

The pandemic forced Comfort Kitchen to delay its grand open- ing by almost 18 months. In the meantime, the restaurant has been operating as a pop-up in various Boston-area locations. Since April, it has been operating out of Little Dipper in Jamaica Plain.

DiGiovanni, who is regularly asked to collaborate on projects around the world, had to dramatically curtail his travel schedule. Purchasing a high-end camera, he ramped up his social media presence, teaching himself to film and edit. “It was a lot of work,” he says, but his efforts paid off. At the height of the pandemic last winter, he was getting close to 425 million views a month on TikTok. 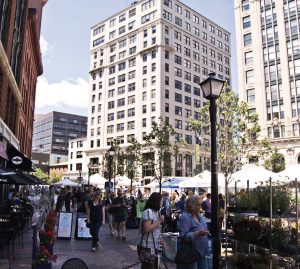 On weekends in the summer and fall, restaurant owner and chef David Turin ’76 gets to do what he loves best: sample the food at the farmers market located near his restaurants in Monument Square—David’s and Opus Ten. “We go out there and walk through the market and get a basket full of groceries that are from the farms we know,” he says. “We bring it in and say, ‘Well, what are we gonna make with this today?’ How does it get more fun than that?” For the past two years, Opus Ten has earned the highest star ratings on Open Table in all of Maine.

As life begins to allow for a routine, all three chefs are looking forward to the next chapter. Turin has resumed his prepandemic schedule, dividing his time among his three restaurants, all now open, and his work in the community. A well-known figure in the area, he is frequently invited to lecture, sit on boards, and, through his work with the Portland Education Foundation, nurture the next generation of chefs.

Despite the many years of hard work, Turin remains enamored with his profession (see sidebar “David’s on Monument Square”).“To this day, I’m passionate about food,” he says. “The most interesting history of the world is the history of the food that is served. If you go to northern Spain, there’s a historical element to how the food has evolved and how it’s served.And it’s not a violent his- tory. There are no wars, no religion, it’s just people eating, and I love it.”

Awogboro is looking forward to the role Comfort Kitchen will soon play in the community. “A lot of businesses exist in a community, but all some do is take from the community; they don’t really give back to it,” he says. “We want to be involved and use the space we have for more than just selling food to people.”

Next year, DiGiovanni will enter Harvard Business School to gain a more solid business foundation. And he plans to continue his presence on social media, where he loves reaching people of all ages and from many parts of the world.

Unlike what is so often available on social media, he says, his contribution to the medium is a positive force: “There is a lot of content in the social media world that can be very polarizing and controversial. I’d like to think that what I do is the complete opposite. I’m all about food, and everybody loves food.”