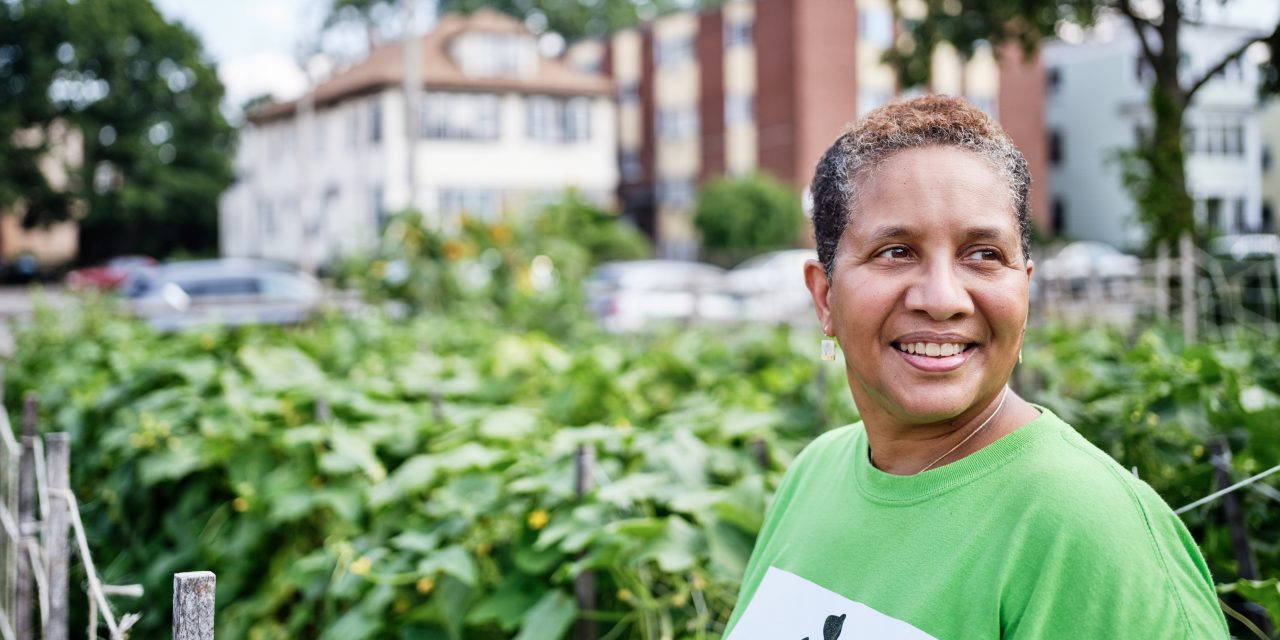 PATRICIA SPENCE ’76, FOUNDING PRESIDENT AND CEO OF THE URBAN FARMING INSTITUTE, BELIEVES THAT THE ALMOST DECADE-OLD ENTERPRISE IS HELPING CHANGE LIVES THROUGH FOOD.

On Norfolk Street, just a block from Blue Hill Avenue in the heart of Mattapan, sits the head- quarters of the Urban Farming Institute (UFI), an almost decade-old enterprise operating five farms in neighborhoods just south of Boston. Its mission: to develop and promote urban agriculture, engage residents of Mattapan, Dorchester, and Rox- bury in growing food, and build a healthier community.

The person overseeing this ambitious undertaking is PATRICIA SPENCE ’76, UFI’s founding president and CEO. Spence recalls how UFI’s founders first approached her in 2014 about heading up the fledgling nonprofit. She had held numerous senior-level positions throughout her career, both in the corporate sector—in marketing and sales for Xerox and Digital Equipment Corporation—and in the nonprofit sec- tor, at WGBH and the Boston Public Schools.

Spence smiles as she describes the founders’ pitch to her about the position. Having recently orchestrated the passage of legislation that allowed for commercial zoning for urban agriculture, “they were looking for someone who could kind of juggle it all,” she says. “I’m the person you bring in when you’re trying to do something different. That’s kind of where I sit in the world, so here I am.” 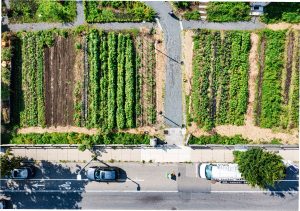 Held in trust by the Boston Farms Community Land Trust, UFI’s five farms, are located on Norfolk Street and at the Astoria Quarter Acre farm in Mattapan and at the Sportsmen’s Tennis Club farm, the Glenway Street farm, and the Garrison-Trotter Neighborhood farm in Dorchester. The 14,000-square- foot-farms produce an abundance of vegetables, from many varieties of tomatoes and mixed greens to eggplants and herbs.

Spence is proud of what UFI’s small, dedicated staff has been able to accomplish since she arrived. “It’s been amazing what we’ve managed to do, and it’s not me, it’s the people,” she says.

Among its many endeavors, the 10-person staff runs a farmers training program, a volunteer program that attracted 750 participants yearly pre-COVID; a weekly farmers market; three CSAs; Fit Around the Farm, a program for seniors; and a wide variety of community work- shops and programs.

Although the past year has seen many of its activities curtailed, UFI is slowly returning to a normal schedule. Its annual urban farming conference, which usually draws participants from across the region, this year drew 400 virtual attendees and speakers from Chicago to North Carolina. A strong advocate for urban farming—both regionally and nationally—UFI sits on numerous committees helping to promote urban farming initiatives.

At the crux of the institute’s mission, Spence says, is its Urban Farmers Training Program. A nine-week course teaches participants how to become urban farming entrepreneurs. Course topics range from soil and crop planting to securing funding. A 20-week in-field program, which has trained more than 230 participants, runs five mornings a week from June to October. “They are hands- in- the-dirt, learning everything about farming,” she says. Ranging in age from 20 to 70, the farmers-in-training come from a variety of backgrounds. “One of our participants was reentering society after a stint of incarceration,” Spence says, “which means he had little work history. For someone with that kind of background, this program is a wonderful experience. This is a gentleman who had never tasted a real tomato before he came to UFI and who lost 100 pounds during his time with the program. We were able to put him right into a job. In a survey submitted at the end of the program, he wrote, ‘If it weren’t for UFI, I don’t know what I’d be doing. It saved my life.’”

An attorney from the class of 2015, who had always wanted to grow food, now runs Oasis on Ballou, a farm for the Codman Square Neighborhood Development Corporation . “He’s very happy,” Spence says. “He’s living his lifelong passion to grow food, and he’s an integral part of urban farming locally and regionally.”

While some graduates become farmers, others find work in food-related businesses.

“We’re training people to become farmers,” Spence says, “but it’s the experience, the team leadership, and all the little things that they’re learning in the process. Many folks are coming in because they don’t have a trajectory. Now they have this core body of knowledge where they are marketable to people in food-related businesses.” Spence loves seeing how UFI has become a positive force in the life of the community. At one Friday afternoon farmers market, where a guest community chef was demonstrating how to cook spicy green beans, she noticed two young boys enthusiastically eating the samples being offered. “They were shoveling in the green beans,” she says, “so I asked, ‘Are they good?’ They replied, ‘Oh, these are awesome.’ Now, how many kids say string beans are awesome?

They don’t! And that’s what I live for.”

Dating back to 1786, the original building, now UFI headquarters (right), once sat on 330 acres of farmland. Over the centuries the house (in red) has been owned by three families. Purchased in 2014 by Historic Boston, the property has expanded to include a wing on the back of the house, where UFI’s offices are located; a barn (center photo) where cooking workshops are held; and a greenhouse where seedlings are grown for purchase.

As pandemic restraints continue to lift, Spence wants to expand the farmers market to include not only cooking demonstrations but live music and the arts. “Suppose the chef is doing callaloo [a Jamaican green] that day,” she says. “Picture a Jamaican steel band playing and it’s kickin. We’ll get there; we would have done it last year had covid not hit.”

Spence is gratified by UFI’s success, but, she says, the organization faces many challenges. “We’re thriving but limited financially. If we’re to continue to do what we’re doing, we need to add staff so that we’re not all doing five jobs.” Corporate, foundation, and individual donors will always be critical to the program, but Spence wants to place UFI on firmer financial footing. Toward that end, the institute launched a $1.6 million capital campaign.

It’s also time, Spence says, to step back and reflect on how they want to move forward. “Between the board and the staff, we’re all doers,” she says, laughing. “Now, that can be a good thing, or maybe not, because we always say ‘yes’ and we all keep doing more and more. Now we are slowing ourselves down and being a bit more reflective about our focus for the future. We are currently completing a two-year strategic plan to build capacity and strengthen our foundation.”

What is likely never to change is Spence’s passion for what UFI has to offer. “When I first joined the organization,” she says, “I thought, ‘OK, I’m here to grow food,’ but within that first year, I realized that food is the medium, but UFI is more than that; it’s about growing people. That’s what excites me: how you can change lives. And it’s all happen- ing through fresh, healthy food.