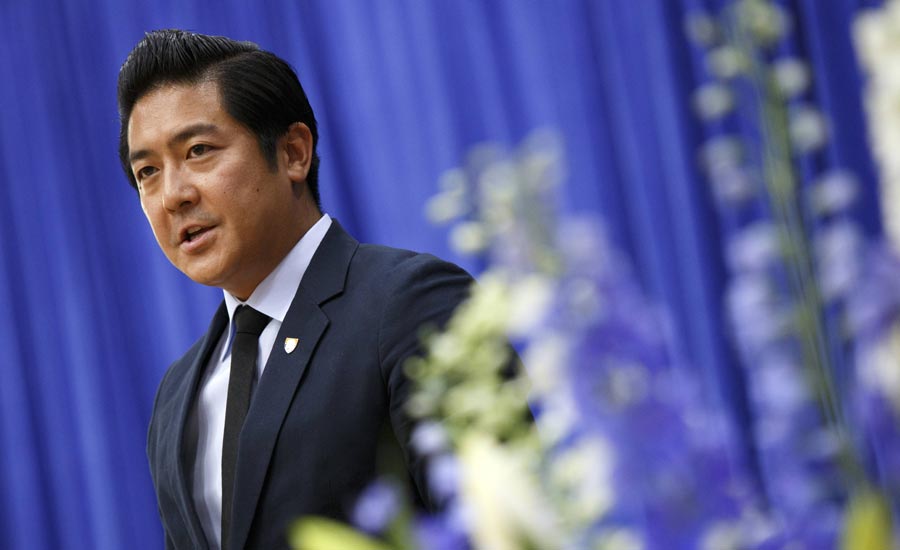 This feels like I’m coming home. I was the valedictorian of my own graduating class in 1998. But at Milton, being valedictorian isn’t based on grades. It’s something the class votes on. So, I wasn’t the best student. Just the most popular. It’s been 19 years since the last time I stood up here. And for those of you in the graduating class who are also blessed with Asian genes, in 19 years you might look like this, too.

I remember standing up here on my graduation day, in a very unfortunate, ’90s-style sports jacket and a ponytail, and looking out at my classmates. I remember the joy and excitement of being able to speak to them about the next step in their lives. And I remember thinking, wow—I am totally unqualified for this job. I didn’t have all the answers then, and almost 20 years later, I still don’t. First off, I don’t feel that I’ve accomplished nearly enough to be your graduation speaker. And if you feel that way, you should definitely contact Todd Bland when this is all over. But, since I’m up here, I’ll try. One member of the Milton family to another.

The last thing I said in my graduation speech in ’98 was this:

“In a few moments, one by one, we’ll take our diplomas, then we’ll file down that aisle, past our parents and teachers, and out into the world. It’s a step I’m willing to take, because I know it is time to do so. But I also know that when I take that diploma, I will be paying for it with a piece of my heart that can never be replaced.”

Right? So earnest! But what I’ve come to learn is, this has held 100 percent true. I haven’t ever felt as at home, as welcome, as nurtured, as I did when I was here. I love this school. Here, I found out what I really loved. Which is making art, and telling stories.

Here at Milton I gained the confidence to believe that I could do those things, like, for my life. It’s where I met my wife, Cara McKenney, with whom I have two wonderful children and who’s out there in the audience right now. Just so you guys know, at Milton, Cara was a jock, and I was an artsy kid. When people ask Cara what I was like in high school, she remembers me as, “the emo kid who was always painting and crying into his ponytail.” So there’s nothing that love cannot overcome.

Since leaving Milton, as I’m sure all of you will experience, I’ve had good days and bad days. I’ve had good years, and bad years. But through it all, I’ve felt very lucky to have lived a life where I get to do what I love. It started at Milton, and it continued. And to me, that’s the greatest gift you can give yourself: To do what you love, every day, for the rest of your life.

So, you may ask, how do you go about this? Well, I have a “Four-Point Plan.” It’s a list, sorry. It’s the simplest way of organizing information. It’s like a critical essay, except it takes no skill and nobody’s grading you.

How do you go about doing what you love, every day, for the rest of your life?

1. Just do it. I feel like maybe I’m not the first one to say these words. But the truth is, for the most part, it costs you nothing to do what you love. When I was at Milton, I spent my time outside of class painting, or making movies. My backpack was filled with paintbrushes, camera equipment, and stage blood. It was weird. But guess what, when you do what you love, things get weird.

You want to make music, or create an app, or dance? Just do it. (I’m going to trademark that.) You’re growing up in a different age than I did. There’s never been more information at your fingertips, but with that also come the tools to practice doing what you love. Paint, read, take photos, take selfies (don’t do that). If you’re into business, read about startups. If you’re a scientist, I know that equipment’s kind of expensive, so break into a lab and experiment after hours. Then, study law and represent yourself during your trial for breaking and entering. The most important thing is to practice what you love doing, every single day. People generally love doing what they’re good at. And finding that out only happens by practicing. Also, if we’re talking about a generation gap, stop looking at your phones. Look at your iPads, the resolution is so much better.

2. Surround yourself with people who help you do what you love, and help them do what they love. I’m going to get real for a second. (Which is, by the way, only something that people my age say to people your age before they ask you if you’re on drugs.) I grew up with a single mom. She’s out there in the audience right now. My sister and I were financial aid kids when we were at Milton. But there was one thing my mom never spared an expense for and that was helping me pursue my interests. She’d buy me books, take me to art shows. Most weekends when I was at Milton, she drove my friends and me around to make movies. She rented me a camera. She rented me a gun. Sure, it was a prop gun. But I’ve just always wanted to say to my mom: Thank you for getting me that gun. I really needed it.

Look. You may not be in this situation now, because Milton is a special place. But the world is filled with people who want to tell you why you can’t do the things that interest you. People who tell you there’s too much competition. You’re not smart enough, not driven enough, or what you want to do has already been done. Those people are only trying to justify why they can’t do the things they love. Don’t listen to those people. (Especially Greg. He’s the worst.) Only you know what you’re capable of.

3. Don’t let rejection break you. This seems intuitive, but it’s the easiest thing to forget. Rejections suck. And when you’re starting out, you’re going to get a lot of them. And not to be a jerk, but you probably deserve them. We all do. I didn’t start out as the best writer or director. When I graduated from college, I made 10 short films before getting noticed. That’s 10 films that I begged my friends to work on. Ten films I arduously wrote, cast, shot, edited and submitted to festivals. Not one of those 10 films was accepted to a single film festival. Sometimes my mailbox would have two or three rejections, back when rejections were, like, mailed to you. They’d just be sitting one on top of the other like some kind of parfait of disappointment. But all that time, I was learning. I was getting better. Most importantly, I didn’t stop. My 11th short film was accepted into Sundance, which opened up doors for me and started my career.

Doing anything worth doing is an uphill battle. The number of rejections you get doesn’t matter, nor does how many people say no to you. What matters is that one person says yes. Don’t give up.

4. This last thing might be the hardest. embrace your contradictions. Each of you is a unique human being, with your own interests that may not traditionally go together. Finding your place in the world means exploring those contradictions. Confuse people. You might be a nerd who loves golf. Or an athlete who finds particle accelerators super-sweet. Putting yourself in a box so people can understand you better is not your responsibility. Embrace your contradictions. That combination of conflicting elements of who you are? That’s what makes you different from everyone else. And that’s your strength.

Looking at you guys right now, I’m transported to the last time I was up here. A lifetime ago. I’m so excited for you, about this next step in your lives, about the friendships, and the strengths you’ve developed here.

In two hours, the Quad will be empty. So I just want you to savor this moment.

Look into the audience, at your teachers, your parents, your grandparents, your siblings. Then look at each other. Know that everyone here is so very proud of you. As you should be with yourself.

Milton’s motto is “Dare to be True,” and, as a teenager, that was just something that I’d see on plaques, or that adults would say—I didn’t know why. But I’ve come back to it, again and again. Dare to be True has meant many things to me over the years. But one way I’ve interpreted it has stayed with me. And if I can leave you with anything, it’s this:

And I know I speak for everyone here when I say: We can’t wait to see what you do.

Tze Chun ’98 is an acclaimed artist and filmmaker who began making movies as a Milton student. Tze graduated from Columbia University, where he majored in film studies. His film Windowbreaker was accepted at
the Sundance Film Festival in 2007. He wrote and directed the 2009 film Children of Invention, a critically lauded story about two young children left to fend for themselves after their mother is arrested for her involvement in
a pyramid scheme. Children of Invention, an official selection at the 2009 Sundance Festival, earned more than a dozen festival prizes, including the Grand Jury Prizes at the Boston and Newport International Film Festivals. Tze, named one of “25 New Faces of Independent Film” by Filmmaker Magazine, has also written for television, most recently for “Once Upon a Time” and “Gotham.” His wife, Cara McKenney ’98, is a Creative Arts Emmy Award winner for her part in the title design of the television show “Mad Men.”