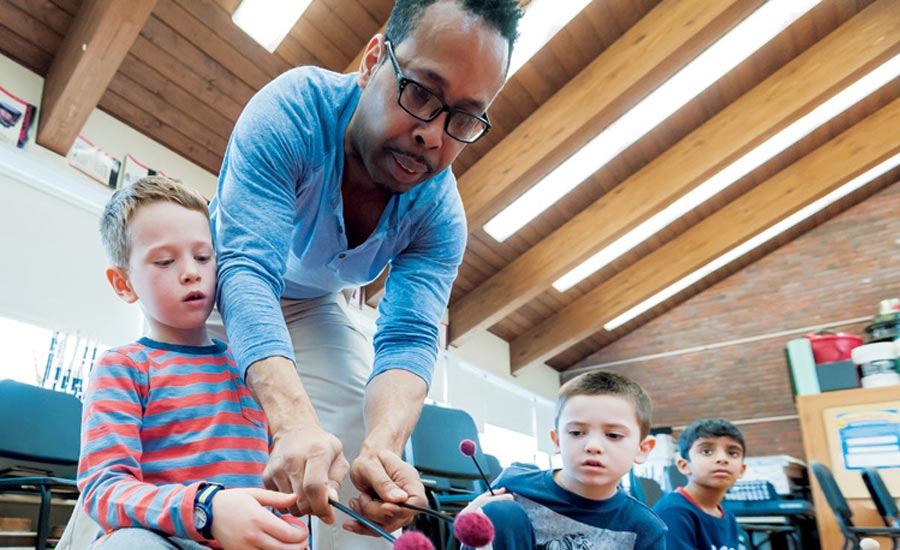 In Pierre Young’s music class, his second graders are “wiggly,” that combination of tired and giddy that can spell chaos even for the most experienced teachers.

But Pierre, nearing the end of his first year teaching music in the Lower School, has a plan. He puts on a high-energy song and the kids are on their feet instantly, dancing as fast as they can. It’s a chance to re-focus the students before they settle into the rapid-fire pace of Pierre’s class.

Next, the room fills with a recording of Owl City’s “Good Time,” which the students are preparing for Grandfriends’ Day. Nobody does just one thing in Pierre’s class—so they sing and dance, stomping their feet and waving their hands in sync. Pierre teaches dance moves along with choral and instrumental music. This summer, Greenleaf Hall’s music room will acquire dance-studio mirrors so kids will be aware of their movement as they learn music.

“These kids are ready, they are on fire,” Pierre says. “They have these gifts and talents, you just tap into where they are and pull them out. It’s my greatest joy.” 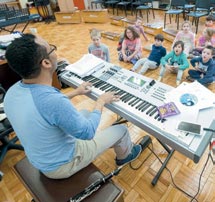 Performance—enthusiastic, early and often—is the chief ingredient in making a lifelong musician or music lover, according to Pierre. The right instruction and encouragement can give students the confidence to enjoy the spotlight, rather than run from it. To that end, it’s not enough to be proficient in scales and rhythm exercises, he believes.

Pierre arrived at Milton from the Boston Renaissance Charter Public School. From a military family, he was raised all over the South. His first exposure to music education was through church. At 7, he sang in quartets, and by 13, he was the director of music in a church. He is a classically trained pianist and professional jazz musician.

“Lower School teachers told me,” says Principal Racheal Adriko, “that in a new music program, they wanted joy. ‘We want children to understand that music is self-soothing and it’s something that will be with them for life,’ they said.” “In Pierre,” Racheal says, “we have found the Pied Piper of Milton. He is more than magical. He is a gift to these children. They adore him. He is a transformative force.”

The force was on display at the all-school holiday assem- bly before winter vacation last year: As the Lower School chorus moved onto the stage—led by Pierre, dressed head- to-toe as an elf—the expected clumsy cuteness seemed imminent, until they launched into a choreographed step routine and sang Kool & the Gang’s “Celebration.” The whole room exploded in cheers.

Pierre hopes to preserve the interest in performance among children for as long as he can. As they grow toward their self-conscious preteen years, some students withdraw, worried about being embarrassed onstage.

The switch from uninhibited to shy can start as early as third or fourth grade, Racheal says. 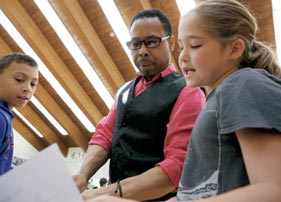 “There’s definitely a turning point,” she says. “It seems that they’re aware of the outer world looking at them, and aware of feeling shame and awkwardness. They pull back a little bit, sometimes without the words to describe what they’re feeling. They’ll just say: ‘I don’t want to do it.’”

Pierre believes that the affirmation of applause and the completeness of preparing for and accomplishing a show are so rewarding, they can help stave off those feelings.

“If you keep performing music, singing or doing other kinds of theater, whatever it is that keeps you out there, you won’t be afraid to keep going,” Pierre says. “Everybody has a voice, and we have to nurture that at the youngest ages. Even if you can’t play an instrument, you have a voice. You can always sing. If you have the proper tools and the training to get there, the sky is the limit.”

“Pierre has brought to our children the permission to express themselves,” Racheal says. “It’s not just about song. It’s about appearance and projection. It’s about movement, it’s about connecting with the people who see the show from begin- ning to end. He says, ‘Even when we have a big show, the stage is still my classroom, so if we don’t get it right, we can start again.’ He’s helping our children see that mistakes are OK.”