When the Middle School Speechies Took Over Birmingham 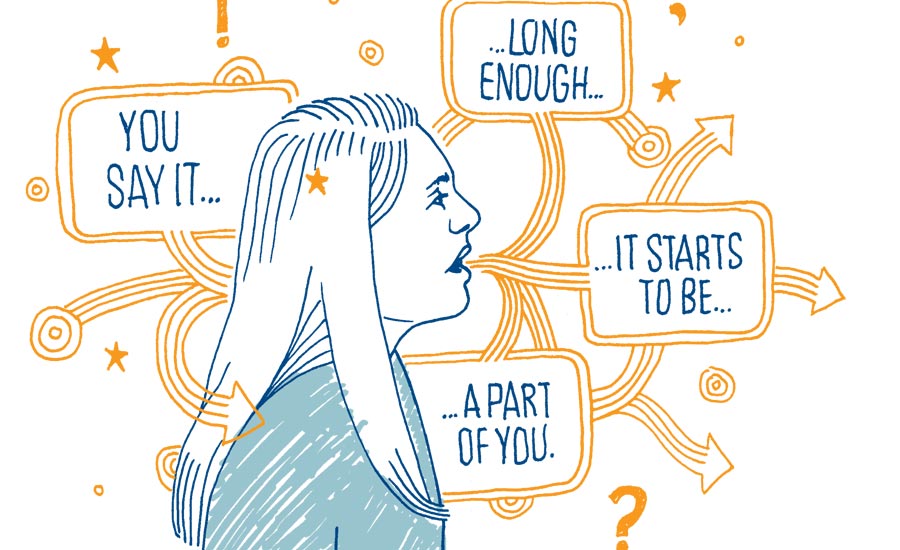 The early signs were easy to spot in the airport: young teenagers muttering to themselves with animated hand gestures; a lanky kid whose hoodie read “It’s Debatable,” waiting for a chaperone to collect a rental car; young people in matching T-shirts volleying foreign policy factoids.

They were headed to the National Speech and Debate Association’s annual tournament in the third week of June, which brings together middle- and high-school teams from across the country—and from some international schools— to wage a war of wits and words.

Fourteen Milton eighth graders, all Class of 2021, represented the Middle School. Milton Magazine followed them for a few days, and devised a guide to an often-misunderstood tradition.

No. 1: There’s a time and a place for celebration.

After the preliminaries, after the quarter- and semifinal rounds, after the tornado (we’ll get to that in a bit), after they’d spent nearly 24 hours navigating a sweaty, fortress-like building and eating maybe too much candy, the last breaks were announced: The top six competitors in each category would advance to the finals, and new national champions would soon emerge.

Throughout the cafeteria of Huffman High School—a massive building in northeast Birmingham, Alabama, the modern anchor of a neighborhood dotted with churches and strip malls—pockets of cheering popped up; some teams erupted with chants and clapping, as others fought back tears. Someone suggested that Milton start a chant; after all, sending four competitors to the national finals was nothing to sneeze at.

“We’re not going to do that,” outgoing team co-captain Ben Simpson said gently. “We’re not that team. That’s not what we do.”

Some Milton speechies were at nationals for the first time, but Milton’s competitive speech tradition stretches back generations. Marshall Sloane ’17 won the national title in extemporaneous speaking in 2016; this year, Alexandra Upton ’18 represented the Upper School and placed within the top 60 in dramatic interpretation. Coach Debbie Simon, the tournament’s 2016 Middle School Coach
of the Year, will retire in June 2018 after nearly four decades at Milton.

Debbie stated her expectations for this last team early and often: They would be prepared and professional; they would support each other unconditionally, in victory and defeat; instead of focusing on winning, they would “speak their truth.”

“I am so proud of this group in terms of work ethic, team spirit and collaboration,” Debbie told the team the night before preliminary rounds started. “I know how hard you’ve all worked, and that you care about what you’re doing. And all I want to hear, if I ask you how the tournament went, is: ‘I did my best.’”

Ben described the team as a family: “We love and support each other, even if we don’t all hang out together all the time.” In their text messaging group, students lobbed encourage- ment and inside jokes to each other, birthday wishes and silly videos.

“Going into every single round, you feel a huge amount of support, because we’re all rooting for each other,” said co-captain Jana Amin. Thea Chung, another co-captain, added, “It’s not just during the tournaments. Speech is such a positive environment that even if you don’t end up winning, it’s hard to be sad for very long at all.” 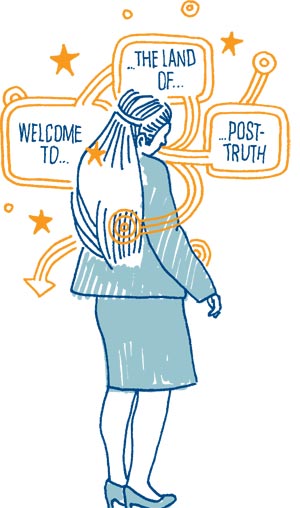 No. 2: When you get it, you really get it.
“Speech is a profound educational experience that’s really difficult to explain to someone who hasn’t gone through it,” says Chris Palmer ’96, who is a technology contractor with the NSDA and a coach at Lexington High School in Massachusetts.

Speechies learn early that both their words and delivery matter, Chris says. At nationals, competitors range in age and maturity, as well as levels of comfort in their business-formal attire. Some of the youngest kids looked as if they’d raided their parents’ closets. Most looked polished and poised, like slightly miniature executives at ease in an unusual environment.

The documentary Figures of Speech, co-produced by Sami Kreigstein ’04, captures the nervous energy of four high-school duo interpretation teams—including one from Milton—as they compete in nationals. They’re “competitive acting”: “Imagine you took a theater geek and a varsity athlete and put them together.” Contestants are self-assured, high-achieving and outgoing. In conversation, they’re measured and thoughtful.

“In speech, you gain the confidence that comes from putting yourself out there and knowing you have mastery of your topic,” Chris says. “Some kids come to it shy and nervous, and others are naturally great speakers. What those naturally talented speakers know by instinct, anyone can learn to do if they put in the time and effort.”

Each speech category has strict rules: Duo interpretation requires the participants to perform a piece of published literature—they cannot use original material, make physical or direct eye contact, or use costumes or props; they have to tell a complete story through carefully choreographed movements and sounds. People who choose declamation deliver an excerpt of a speech that was delivered in public. Original oratory requires the speaker to deliver their own speech, written to educate or persuade the audience on a topic of their choosing. Impromptu speech gives competitors a choice of three prompts, then seven minutes to prepare and deliver a speech on that topic; and so on.

Carli Gilson’s dramatic interpretation piece was adapted from While the World Watched, a book by Carolyn Maull McKinstry, who survived the Ku Klux Klan bombing of Birmingham’s 16th Street Baptist Church, which killed four of her friends. Carli had practiced the piece long before the tournament, but a visit to the church when the Milton team arrived in the city lent power and depth to her performance.

Jana wrote an original oratory piece on living in a “post-truth society” that swung from lighthearted to heart-wrenching, as she described a sensational headline extolling the virtues of eating ice cream, and later delved into her own fears about being a Muslim girl in the face of lies and misunderstandings about her community. The grave danger caused by mass dissemination of false information became clear to Jana during a visit to the Holocaust Museum in Washington, D.C.

“We all need to realize that our post-truth habit could lead us down a path that history has already recorded. So, I invite you to join me in campaigning for the truth,” she says. 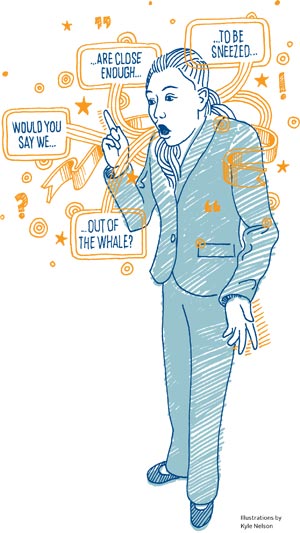 No. 3: Be ready for anything, even an act of God.
“How tall are you, man?” a judge asked Milton co-captain Garvin McLaughlin when he stepped in the room before a storytelling round. All eyes were suddenly on Garvin—who is taller than this judge—and the other students literally sized up their competition. The question added a perfect twist to Garvin’s story, which required him to transform into Charlie the Caterpillar, a character from a 1993 children’s book who is “very, very small.” He pulled it off, advancing to the quarter-finals.

Going into the rounds, the speechies had no idea what kind of judge they’d meet—they might wind up with one who asked abrupt personal questions, or the judge who kept his face parallel to the desk, never looking up from his notes—nor could they count on consistency in setting. Events were held in classrooms, computer labs, conference rooms, closets and even open, adjoining rooms, which required competitors to perform as if they were unruffled by the simultaneous speeches happening 20 feet away.

They knew to expect the unexpected, and to stay focused through minor distractions, and so an announcement on Thursday after- noon took a few minutes to settle in: All competitors and adults must report to the school’s practice gym immediately, even if they were in the middle of a round. With nearly 1,000 students and hordes of parents, coaches and volunteers packed in and trying to guess the cause of the lockdown, the gym instantly became uncomfortably tight.

Tropical storm Cindy had dropped an EF-1 tornado in Birmingham’s Fairfield neigh- borhood, leveling a small shopping center and collapsing the roof on at least one home. The only injuries reported were minor, but tornado warnings are taken very seriously in Birmingham, especially after a deadly storm blew through the city in 2011. Huffman High School’s practice gym is windowless and fortified by foot-thick walls—it was a safe, if steamy, place to wait out the weather.

The tornado arrived just before breaks were announced. When a competitor breaks, they’ve moved to the next level of competition. The atmosphere before the announcements is tense, even without the interruption of a natural disaster. “This is what speech tournaments are all about. Waiting, performing, and waiting,” Thea had said the day before. The students watched for any sign of official word; any adult carrying a piece of paper into the cafeteria could set off dozens of “are they posting the breaks!?” inquiries. Then, almost as soon as the categories were announced, they were off, scattering to classrooms for their next rounds.

Of the 14 Milton students competing, 12 broke beyond the preliminaries.

Finally: There’s a time and a place for celebration.
On the last day, the middle school competitors were in downtown Birmingham for the finals, followed by an awards ceremony at the Birmingham-Jefferson Convention Center. Ben and Garvin’s duo performance, “Someone Who’ll Watch Over Me,” about two hostages held in Beirut in 1992, earned them a third- place trophy. Sam Bevins took fifth place in declamation, for her performance of Rita Pierson’s speech “Every Kid Needs a Champion.”

In the original oratory ceremony, Jana stood onstage with her fellow finalists. Each of the top six would be recognized in the category. The team buzzed with excite- ment when there were three left, then two, and finally erupted in cheers: Jana was the new national champion.

The Middle School team was also recog- nized as one of the five “Teams of Excellence,” a designation Debbie said recognizes every member.

Then it was over. Hugs and cheers of congratulations and a fancy team dinner followed. On Saturday they explored Birmingham’s historical district, learning more about the city’s pivotal role in the civil rights movement, before flying home and dispersing for summer vacation. The text messages kept coming: “Thank you all for everything!!! <3” “Thank you so much Ms. Simon … these past two years have been amazing.” “Oh my lord everyone quiet on the plane!”