You, too, can have your own, cozy classical music party 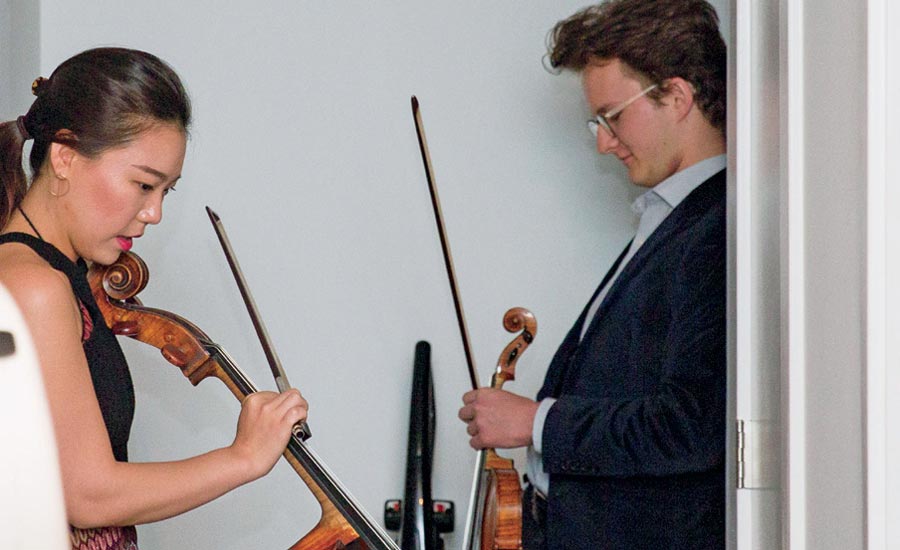 Seven stories above West 57th Street, the acrobatic notes of centuries-old piano music nearly drown the Manhattan symphony of sirens, car horns and bus brakes. About 30 people—some strangers, some friends—give their rapt attention to what is happening on the keys. 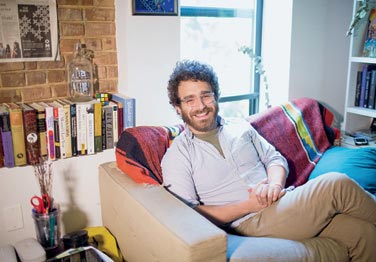 Sitting cross-legged at the heel of the piano is Sam Bodkin ’07, who closes his eyes and taps his fingers in sync as Jeremy Jordan plays Chopin’s Polonaise in A, Op. 40. Sam is the founder of Groupmuse, a social network connecting classical musicians with audiences at intimate, informal gatherings, typically in the living rooms of apartments and homes.

On this April night, the crowd’s ages range from 21 to about 70. They’ve come to hear Mr. Jordan, a Juilliardtrained soloist and chamber musician. He begins with Saint-SaeÅNns and moves on to Bach and Chopin. Later, he’s joined by jazz musicians to improvise versions of Debussy’s Clair de Lune and the waltz from the video game “Zelda.”

Between sets, guests mingle with the musicians and each other. One woman, a first-time Groupmuser, explains that she enjoys classical music, but is not “the type who’d look forward to getting dolled-up and going to Lincoln Center or Carnegie Hall.” She read a newspaper article about Groupmuse and was sold.

People have different motivations when they RSVP, Sam says. It’s a great way to explore a city and meet new people— Sam now lives with his partner, Emily, who was a “solo roller” at Groupmuses when they met; he has built close friendships and attended weddings of fellow Groupmusers. It’s an inexpensive and casual way to hear live classical music, and it’s a venue for performers to connect with audiences that may become fans. 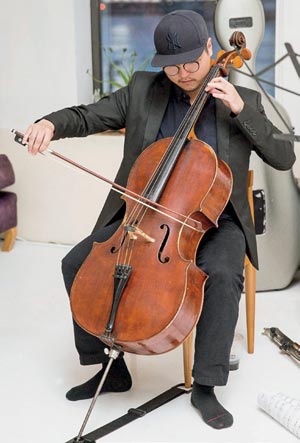 “These are chamber music concerts. Chamber music was originally intended for small, intimate performance,” says Sam. “I think the music is a real draw, but there’s also an overarching sense of the mission, which is to bring people together to experience something with beauty, depth, substance and spiritual significance, these sounds that have been inspiring people for centuries. It’s a way to imbue everyday life with great beauty.”

After graduating from Milton, Sam spent a year traveling Europe with a friend before entering college. During that time, they used the social network Couchsurfing to find local hosts who opened their homes for free to travelers. The spirit of sharing would plant the seed for Groupmuse a few years later.

“That was how we made our friends, and how we visited all of the countries we stayed in, and it was revelatory,” Sam says of Couchsurfing. “It was eye-opening to see what the internet had made possible in terms of a cultural exchange and how willingly generous people were with their spaces in the name of that cultural exchange.”

Sam plays the piano but is not a Groupmuse musician— and at Milton, he played in bands and participated in an album club. He didn’t know anything about classical music until his freshman year of college, when a friend asked him to listen to a cello piece he was working on.

“I became an overnight evangelist,” Sam says. “Within six months, I was so obsessed that I went to the Newton Free Library and was yanking everything off the shelves indiscriminately, just packing my brain with as much of this stuff as I possibly could. I decided, pretty definitively, that I was going to devote my life to expanding listenership for this art form.” 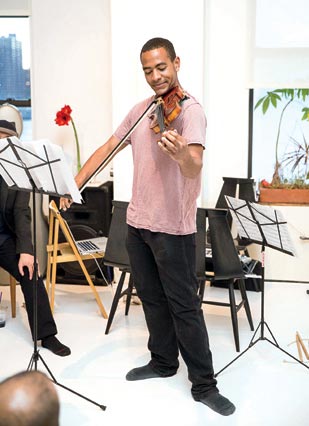 Classical music added “richness” to Sam’s life. He began making mixes for “anyone who would express even the faintest whiff of interest in classical music.” After two years at Colby College, Sam transferred to Columbia, where he majored in political science, even though, he says, “this obsession with classical music quickly became the focal point of my entire intellectual, creative energy.”

On breaks during his junior year at Columbia, Sam started hanging out with friends who were studying at the New England Conservatory. Parties in Boston’s student-packed Allston neighborhood came with a classical music soundtrack.

“The light went off for me. I could be at an awesome party, with artists who really know how to throw down, and take the moment to listen to something so beautiful. I realized it had infinite potential as a way to get more people into classical music, and also as a way to bring communities together around something meaningful,” Sam says. “Essentially, anyone who has a floor can host a party like this.”

The problem with broadening the audience for traditional classical music performances, Sam says, is environmental. Outsiders might see it as art of the elite, with impersonal concert halls and the formality of the concerts keeping the audience separated from the musicians and the music itself. Although more traditional classical forums often try to bridge the gap by offering discounted tickets to students and young people, the assumption remains that classical performance is rigid and stuffy. 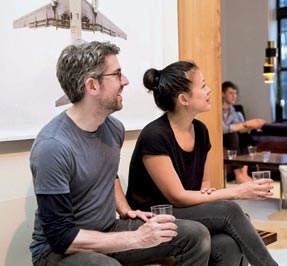 “The revelation that led to Groupmuse was my realizing that providing live classical music in a more relaxed, social setting could make it a great asset in a moment that seems so desperately lacking in positive and meaningful social opportunities,” Sam says. “People need a reason to be around one another, and to connect to each other.”

The first Groupmuse was hosted by Milton alumnus Jonathan Coravos ’06 in Somerville, Massachusetts. John and Sam each brought friends, and at the end of the performance, Sam asked “Who’s going to host the next one?” Six people raised their hands.

Soon, there were nightly Groupmuses in Boston. They have since expanded to New York, San Francisco, Los Angeles and Seattle, with plans to launch in Washington, D.C., Chicago, Baltimore, Philadelphia, Detroit and Cleveland. Nearly 3,000 Groupmuses have been held so far. Performers interested in joining Groupmuse can submit links to audio or video demos through its website, which are then reviewed by the company. If they are of professional caliber, they’ll be approved. The musicians are matched with hosts based on ensemble size and guest capacity. 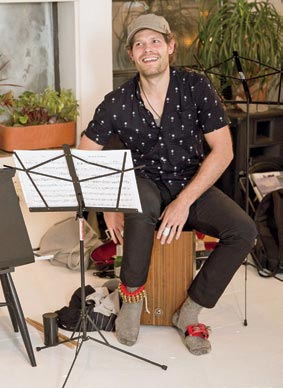 Thanks to some “very lucky connections,” Sam developed a rudimentary website in early 2013. By June of that year, he had his first co-founder on-board, a childhood friend and musician named Ezra Weller. Three months later, Sam recruited his friend and second co-founder, Kyle Schmolze, who brought startup experience and Web devel- opment skills.

After a few lean years, Groupmuse stabilized financially. The founders’ first priority was paying the musicians: guests at every  Groupmuse are expected to give at least $10, all of which goes to the performers. To stay in operation, the three raised money through private capital and the crowdfunding website Kickstarter. In 2016, they decided to charge $3 for guests to reserve spots. “That created some much-needed revenue for us,” Sam says, “and it ensured that people would actually show up.” Groupmuse has been profitable since late 2016.

“Overwhelming mistakes” plagued the business as it struggled toward profitability, such as hiring more people than the operation needed. Now cooperatively owned, any new hires will have a stake in the company’s future.

In addition to its home parties, the company works with other classical music organizations to help sell tickets to young fans through its Groupmuse Nights Out program. They now also offer Massive muses, larger performances that can accommodate bigger audiences.

Sam’s ambition for the company is nothing short of global. 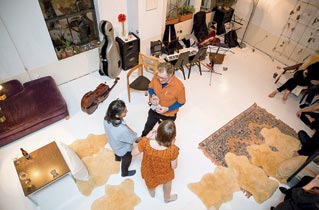 “I want Groupmuse to be a resource available to musicians in every major city on Earth,” he says. “I want musicians to be able to use it as a tool to cultivate and be supported by local listenership, and I want it to be used as a tool for communities to get to know each other. If we’re building sustainable relationships that have a positive impact within the places we serve, I will consider it a success.”