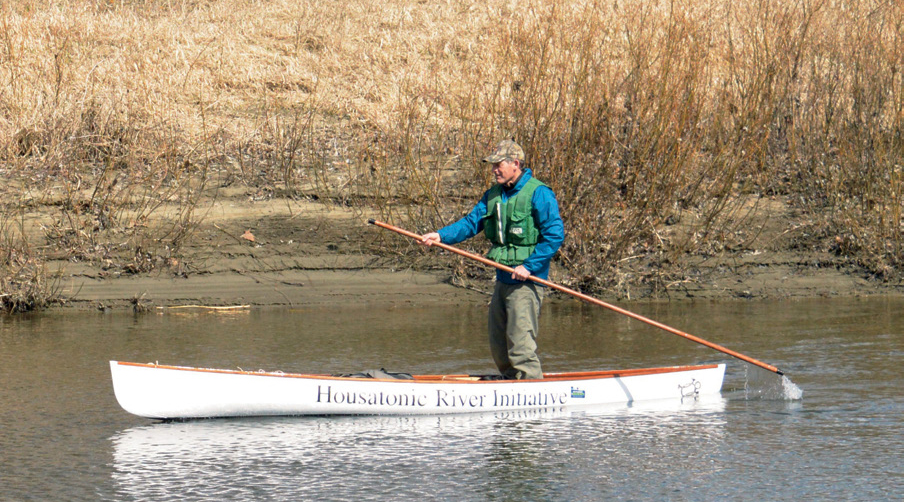 You don’t walk your dog along the river in my town, Stockbridge, Massachusetts. You don’t eat fiddleheads from its banks in the spring. You don’t wear your golf shoes into the kitchen. You don’t eat dairy, wild game and produce from our flood plain, the Housatonic River flood plain. If you canoe, you avoid contact with the water and fine silt, and as your neighbors succumb, as their dogs present tumors, you worry.

When I was a Class III student at Milton in 1962, Rachel Carson’s Silent Spring was our environmental wake-up call. We were all very aware of what she said about DDT, and back home in Stockbridge, I watched what happened to the birds after our gypsy moth infestation was sprayed with that insecticide. Today, General Electric’s polluted legacy continues to wreak havoc upon the Berkshires—in the form of a potential $10 billion PCB toxic liability. Meanwhile, Massachusetts officials celebrate the mega-corporation’s continued development, now in Boston. A sort of alternative GE reality emerged, where GE’s influence and money has, for instance, made the PCB cancer risk disappear, environmentalist Tim Gray explained in The Berkshire Edge.

In 2016, I canoed across Massachusetts, the same route I took in 1988, with the same mission: to draw attention to the toxic aftermath of GE.

Pittsfield, Massachusetts was a “company town” for GE beginning early in the 20th century. For decades until they were outlawed by the federal government, polychlorinated biphenyls (PCBs) seeped from GE’s manufacturing plant into the soil. Following the ascendancy of Jack Welch to chairman and CEO of GE in 1981, the Pittsfield plant closed, leaving in its wake 13,000 unemployed people and an environmental catastrophe.

On January 13, 2016, Governor Charlie Baker trumpeted the move of GE’s global headquarters from Fairfield, Connecticut, back to Massachusetts. “It’s an ecosystem we are confident we will thrive in,” said GE Chairman Jeff Immelt. Boston Mayor Marty Walsh likened GE’s arrival
to winning the lottery: $145 million in tax incentives for all the GE jobs. “Do the math,” cried the mayor. 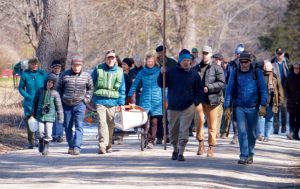 All photos by Ben Garver, The Berkshire Eagle

Two weeks later, Immelt announced that GE was backing away from its multimillion-dollar cleanup of PCBs in the Housatonic River watershed. GE’s take from our Commonwealth, facilitated by Walsh and Baker, would be $758 million.

More than before, it was time to “Dare to be true.” I decided to repeat the 1988 journey I made across Massachusetts, Canoe For Clean Water. It would have impact, but it was a perishable gift. I was 69 years old.

When you decide to move, a journey takes on a life of its own. Which canoe to use? The old canoe I had built in 1988 for the first trip was stashed in the hayloft of the barn—I went and pulled it out, dusted it off. Nina could see that I had made up my mind, so she laid a tarp over the dining room table and the old canoe came in through the window. Friends of the river appeared.

I mixed cloth and glue to mend a puncture. We made stencils and, using leftover house paint, painted in black letters on both sides of the canoe: Housatonic River Initiative. The first TV crew appeared at the kitchen door. Who invited them?

The canoe was white like an old plaster cast except for the bold letters of Housatonic River Initiative, and a Mohican turtle symbol traced onto either side of the bow. I chose the turtle, a water animal, to symbolize “Turtle Island,” an indigenous name for North America, indicating the earth, all life, and the importance of water. A blank slate at the beginning of the journey, the canoe would carry the indelible marker messages inscribed by scores of people I would encounter: “Speak truth to Baker” was one message. “Massachusetts Dreamer,” said another. Had our politicians in Boston even heard of the Housatonic River?

March 21, the word was out along the river. The canoe on wheels, my knapsack packed, I led a motley band of drum-beating family, friends, activists and local press to a beautiful curve of river near the Connecticut border for the launch, Connecticut also having been affected by the PCBs dumped in the Housatonic. We had a small ceremony, and I was off.

What a relief to be off, to have crossed the line from planning into journey. Just as science requires real observation, this river is my primary source, my lab. It was the canoe, the pulse of the distant drums, and whatever came next. A snow squall circled me. I began poling upstream through the beautiful valley toward the abandoned GE factory that had poured the poison into the river. I begin to feel the riverbed with each push of the pole—a physical connection to watershed, mud, gravity, the slope on which we live. I experienced my river, gathering beneath me, informing me.

The route swallowed days. I portaged to an elementary school. Third graders from the Muddy Brook school lifted the white canoe over their heads—I was so amazed! They carried it back to the brook for which their school was named. The brook became a swamp, where I became confused. I followed beaver channels, a stream back to the river.

Four days I ascended the Valley, poled through the most poisoned oxbows and lagoons, to the site of an HRI press conference in mixed sleet and snow near the GE plant. Survivors spoke movingly about the suffering, the cancer, their disappeared medical histories, of the thousands of jobs that left Pittsfield. I described the landscape I had just seen.

Swollen feet pushed the canoe on wheels over the height of land to the headwaters of the Westfield River. The river, white water in 1988, was dry! I walked down channels of rocks instead of kneeling through rapids. 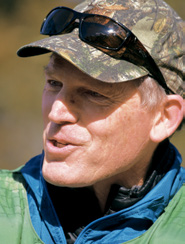 I found myself camped beside a radio tower, the irony of silent snowfall on its rusted steel on an island outside of Springfield. A press conference was scheduled at the wastewater plant on the mighty Connecticut River the next morning. Journalists from TV, radio and print showed up in spite of a blizzard. I thawed out with Tim, Benno, Judy and Nina, and my sister Suzette, Milton ’62, in a blessedly warm restaurant.

A day or so later, I was again warming up, in a pizza shop above the Chicopee River. A man pressed the front page of The Springfield Republican to the plate-glass window. “That’s you!” he shouted. The story was detailed, clashing, gripping; the reporter’s dueling paragraphs switching point of view, from Tim to Immelt, to me, to a spokesman for Governor Baker. Unnerving, but energizing.

I reached the Blackstone River. I canoed under the Mass Pike again to reach abandoned mills, Worcester’s ruins of the industrial age. I squeezed through a four-foot diameter culvert in three feet of water under Route 290. In Worcester, where the river went underneath a former factory, I met with eighth-graders who carried the canoe overhead, chanting, “we are water,” and we celebrated the restoration of the Blackstone riverbank with city councilors and the Mass Audubon Society.

Traveling alone by canoe made me vulnerable and accessible. I felt the tension of people who stepped forward silently in suburbs to sign the canoe. The Maynard Police Department honored the spirit of my journey with hot coffee and pastries, and by keeping an eye on the canoe as I retraced my steps.

By the time I arrived in Concord, the canoe was no longer white, but multicolored with magic-marker messages of support. I rode it to the Charles, the profile of my journey about to rise. WBUR did a 10-minute interview beside the canoe on the bank of the Charles River.

Cars slowed along Memorial Drive in Cambridge, blowing their horns, drivers waving. A bicyclist rode across the grass to offer me a candy bar.

I approached the finish the next day at noon. Would anyone hear our attempt to hold accountable those in power? I saw the first still photographer, then a television grip lugging a heavy tripod. Tim, Benno and Judy waved me to a dock beside the Esplanade. Nina and her band of banner-makers braved the wind. Six of the third graders from the Berkshires had talked their parents into driving them three hours to the finish.

They hefted the canoe. I heard one whisper to her friend in awe, “I found my signature. It’s almost worn off.” They carried the canoe of many colors over their brave heads once again! “We are water, we are water,” the chant resumed. A small circle formed around them, parents, curious joggers, The Boston Globe, gray-hairs, our eyes and minds meeting, melding.