They See, Snap and Share: Students on Their Devices 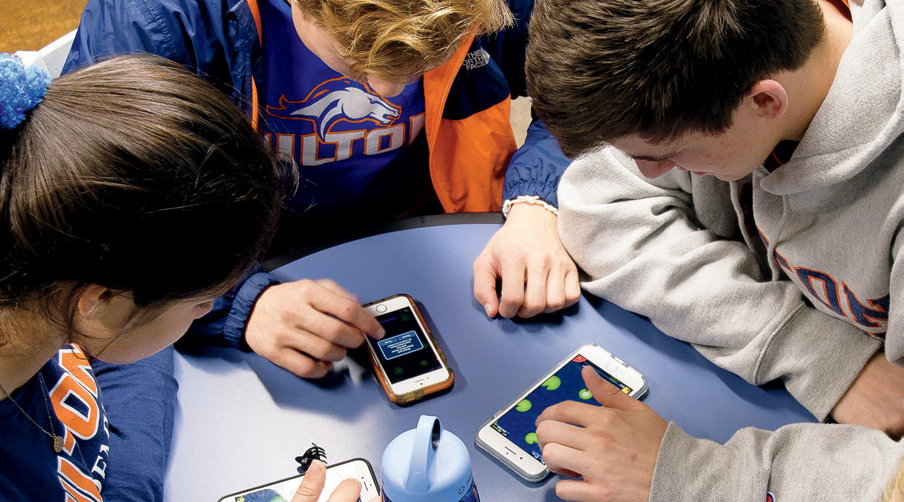 Many adults scroll through, watch or share hundreds of posts, feeds, photos and videos every day. Posts can provoke emotions from joy to intense sadness, and some deliver misinformation or lies. These personal habits among adults lead them to worry about how social media affects the lives of their teenagers.

For a status check from the point of view of today’s teen practitioners, students shared their views about social media, particularly Instagram and Snapchat, their two most popular social media platforms. In addition, Lisa Morin, director of counseling, and Elihu Selter, clinical psychologist at Milton’s Health and Counseling Center, relayed their experiences as professionals who encounter the impact of kids’ digital lives every day.

Ninety-two percent of teens report going online daily, including 24 percent who say they go online “almost constantly,” according to a 2015 study (ages 13–17) from the Pew Research Center. In many ways, students are more savvy about social media than adults. They know how to use the apps, they speak the language and they understand the unspoken rules. They are also aware of the pitfalls and the problems, but this doesn’t mean they are immune to them. 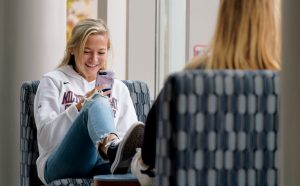 Social media is a great way to remain in touch with friends from previous schools, camps, teams and clubs, students say. It’s also a way to stay connected with siblings at college and just families, in general. “Seeing someone and what’s going on in their life on the other side of the world is great,” says one student. “Even if it may have been edited, it’s still happening and you can appreciate that.”

Both Lisa and Elihu say social media can be good for introverted teens, because it’s an easy, and sometimes safer, way to make connections. “It gives them an opportunity to practice talking with someone, without having to do it in person, so that can be a valuable tool,” says Elihu.

As an open forum for expression, social media can facilitate activism and organization advocating causes and beliefs, which many students, especially at Milton, embrace.

“Students can connect with each other in ways we couldn’t when we were growing up,” says Elihu. “They can participate in movements and engage in ideas and processes, and social media used this way is quite amazing.”

“Milton encourages you to express yourself and your opinions and I definitely see that a lot on social media, especially on finstas*,” says one student. “Everyone’s just talking about how they are feeling and why.”

Many teens get their news on social media. Snapchat is often their first news source for breaking stories. Mainstream news outlets all have Snapchat “channels” and students can choose to follow some and receive alerts.

Students also value accounts that explore issues such as body positivity, which can counter those that promote the “perfect” body. “Following them is really great,” says one student. “It’s not that I have huge issues, but it just makes me smile to see that there are people doing that in the world.”

What might surprise some adults is that phone calls are still valued. “If I get a phone call, I’m going to pick it up, because to me, a phone call means ‘right now, I need to talk to you,’” says one student.

“I have a couple friends on medical leave right now. I’ll text them during the day but I’ll call them in the night to actually have a conversation,” says another.

Most students who spoke have a limited number of social media accounts. They also take breaks from using them or completely stop using certain accounts for various reasons; although everyone mentioned knowing students who are “addicted” to social media.

“I stopped using Snapchat the summer before freshman year because I found I wasn’t interacting with my family and friends as much as I wanted. My sister was going to college and so it was let’s focus on time with her before she leaves.”

“When I had Snapchat, I was all for it. I was loving it. Then when I took myself out of it, I realized that it probably wasn’t the most beneficial thing for me,” says another.

“I rarely come across a student who does not have any social media, but there are some who say, ‘No I’m not getting into that.’ Or others actually shut it off at night. But that’s even more rare,” says Lisa.

Lisa and Elihu explain that because their frontal lobes are still developing, teenagers are susceptible to acting on impulse, a dangerous tendency when it comes to social media. But also concerning are trends the counselors see
in overall person-to-person communication.

“How we communicate and the depth of our communication has changed and I wonder how that translates into friendships,” says Elihu. “Relationships don’t have as much depth to them, and I worry about that because this is the first generation to experience this. The art of talking has been lost in so many ways. Does social media affect the way fully get to know somebody? When my children, who are 6 and 8, are teenagers, what will life look like for them?

Students share this concern. “I worry the most about little kids who are growing up with this system and how they’re going to learn to distinguish real facts.”

Most students are aware that many photos and posts are manipulated, staged or carefully selected. “People aren’t going to necessarily post the negatives in their life,” says one student. “They’re showing their highlights. You are seeing or posting the cool things that are worth sharing. You don’t see just ordinary things on social media. It’s kind of an alternate reality; you’re not always getting the full picture.”

“Everyone is so addicted to praise,” says another student. “Everyone’s fishing for compliments, for ‘likes,’ it’s a never-ending obsession. It’s damaging to your self confidence and welfare.”

Elihu says this can especially be a problem for “students who might feel marginalized, ostracized or depressed. They already feel, ‘Everyone is doing okay but me.’ They spend their weekends scrolling through these posts and say, ‘Wow, everyone seems happy all the time. I’m not good. Here’s all the evidence that everyone else is great.’ So it’s really hard for them to get out of that bubble of thinking their life is difficult, because it looks like everyone else is doing well. Getting them to see that these posts are not necessarily real life is a huge challenge.”

Students who understand the pitfalls or understand that some things might not be real reached that realization through hard experience. “One of the biggest issues is that you don’t know who’s behind the screen all the time,” says one student. “You may think you are Snapchatting your friend, but it may be somebody else using their account and telling you things. That was really confusing and upsetting to figure out at first. It violates a sense of trust between the you and your friend.”

Lisa points out that social media is 24/7 and shutting out the noise is hard for students. “Before social media, if you had a fight with a friend or were being picked on at school, and you went home or back to the dorm, that would be a break. But today there is no break, because online it’s still happening. There is no healthy way to shut it off.”

Elihu notes that with one upsetting post, a student could be “done for that day. They check out. Sometimes that one image can destroy you for a week, if not more.” Students said some of the most upsetting posts involve bullying, sexual references, and joking—particularly racial and gender jokes.

As for getting news and information on social media? “You can like or follow whoever you want, celebrities, politicians or people in your friend group,” says Lisa. “You basically curate what you want so your social media input becomes an echo chamber. You are not learning to have a discussion with someone who disagrees with you.”

“People talk about how we seem disconnected from one another even though we’re more connected than we’ve ever been,” says Elihu.

Educational institutions are all wrestling with this reality—figuring out how to help students set boundaries, navigate the social dynamics of being a teenager online and evaluate the constant stream of feeds funneling information.

Milton Academy has contracted with The Social Institute to work with students for the next two years. The Institute’s approach is to empower teenagers to use social media in positive and constructive ways. Instead of focusing on what teens should not do, the focus is on how to use social platforms to do good. The Social Institute will work through student assemblies, parent presentations and small workshops with student leaders.

*Finsta: fake Instagram, more popular with girls. Typically a finsta is a second account limited to a smaller group of friends. Students said they can post more freely and be their true selves on finsta accounts. Their main Instagram accounts have more followers, and they post less often and more selectively.