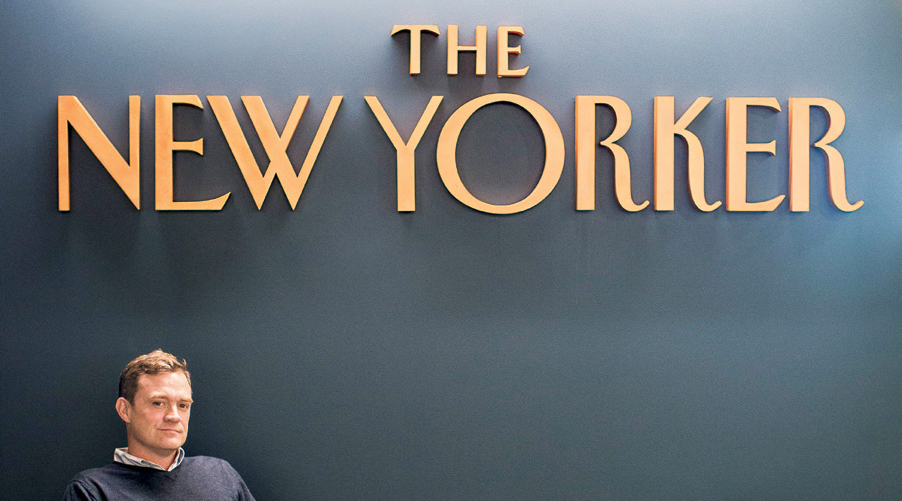 If this story were to begin the way Patrick Radden Keefe’s stories in The New Yorker do, the first sentence would roll an explicit nugget of juicy fact your way. Craving a few more details, you’d slide right into the second sentence, and you’d be hooked.

The title might have been what caught your interest and arrested your casual page-flipping—something like “The Family that Built An Empire of Pain,” or “Solving the Mystery of the Lockerbie Bombing,” or “Anthony Bourdain’s Moveable Feast.” By the end of the first paragraph, you would be bound to continue Patrick’s deep dive into an intriguing and often startling world.

Patrick is an investigative journalist, a staff writer at The New Yorker magazine. He has written about the trial of Boston Marathon bomber Dzhokhar Tsarnaev; the vast hedge-fund scandal rooted in the relationship among a doctor, a trader and the billionaire Steven A. Cohen; and the power tactics of Carl Ichan as President Trump’s friend and official advisor.

Patrick received the National Magazine Award for Feature Writing in 2014 for “A Loaded Gun,” and was a finalist for the National Magazine Award for Reporting in 2015 and 2016. He has written two books: The Snakehead: An Epic Tale of The Chinatown Underworld and the American Dream, and Chatter: Uncovering the Echelon Surveillance Network and the Secret World of Global Eavesdropping. His third book, Say Nothing, about the IRA, will be published in 2019. Patrick received a Guggenheim Fellowship and fellowships at the Woodrow Wilson International Center for Scholars, the New America Foundation, and the Cullman Center for Scholars and Writers at the New York Public Library.

His writing often elucidates people and processes that are hidden in plain sight. “I’m interested in the unknown, in the secret, in excavating—sometimes looking at something that is actually right out there, but not really all that well understood,” he says. While Patrick was studying for the bar exam in 2005, for example, a criminal trial happening a few blocks away, in downtown Manhattan, piqued his interest. The defendant, a woman known as “the snakehead,” would eventually center his second book about the immigrant economy in Chinatown. “I was so distracted by these really colorful stories about this amazing woman. The Feds were throwing the book at her for being a human smuggler, but in Chinatown she was considered a hero because she had helped so many people. I pitched that story to The New Yorker as an article, and they took it. That was my first piece for them.”

Patrick had completed Yale Law School after having taken a leave to complete his first book, on surveillance and electronic eavesdropping. While writing the book he’d published stories in Slate and New York Review of Books. This first New Yorker story about Sister Ping and the immigrant economy in Chinatown ultimately became his second book.

“Many times, subjects I’m looking at are not by themselves sort of sexy or engaging; a lot of times they can be quite dark,” Patrick says. “Often my work is digging and trying to bring things to light that aren’t necessarily in the public realm. That involves finding stories, finding the people who are characters so that you can present your subject as a narrative.” With that approach, Patrick has brought some memorable people to the forefront.

For example, Sister Ping, “short and stout, with cropped black hair, wide-set, dark eyes, and a hangdog expression . . . ,” spoke almost no English, had little formal education, and wore the simple clothes of a Chinese peasant. She was an ample foundation for revealing the immensely profitable international business enterprise she ran, which inspired both condemnation and praise.

The Brooklyn-born brothers, psychiatrists and great philanthropists, Arthur, Mortimer and Raymond Sackler, bequeathed to their heirs an immense fortune and the legacy of “leaving the world a better place.” The source of their wealth is less well-known. They were the architects behind the development of OxyContin in 1995 and, perhaps more importantly, the comprehensive and successful strategic marketing program aimed at changing the prescribing habits of doctors across the country. OxyContin, the often-abused opioid painkiller, “has reportedly generated some $35 billion in revenue for the family firm: Purdue Pharma,” Patrick wrote.

Carl Ichan, the restless corporate raider, “pugnacious deal machine, all avarice and swagger,” and “voluble critic of any government regulation that constrains his companies,” is still setting his targets at 80 years old. He assisted President Trump in assembling the administration’s cabinet secretaries and agency heads. Often, interviews with Trump in Trump Tower were followed immediately by interviews with Ichan, “just down the street.” The inveterate power broker disrupted an industry and aggrandized the profits at a refinery he owned, as he brandished his role as special advisor to the president on regulatory reform. He announced his exit from the administration as a resignation. The White House claimed he never had an appointment, despite press releases to the contrary. 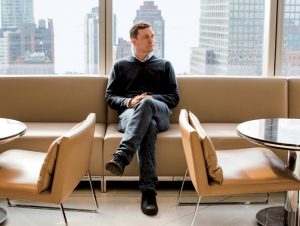 Patrick says he imagines “the reader who’s just gotten onto the subway, magazine open, folded over a bag, and then they’ve got three stops . . . or it’s 10:30 and the person’s just gotten into bed and they’re going to be asleep in five minutes. Sometimes the story you’re telling is the one that person might skip, like about corruption in the mining sector in West Africa.” Patrick’s ambition is to tell a story that is gripping and seductive in a narrative manner, so readers will engage with something they hadn’t, or wouldn’t, otherwise—about the workings of an underground economy, or insider trading in the hedge fund world, or about corruption right under our noses.

For Patrick’s storytelling style, one of the biggest questions is whether people at the heart of the story “will play ball at all,” as he puts it. Most people, he finds, want to tell their story. If he shows that he takes them seriously and asks good questions, by and large people tell him interesting things.

“With my investigative work, however, I often write about people who don’t want me writing about them.” An unwillingness to be interviewed crops up frequently. He’s made “something of a specialty” of “the write around,” a method for writing the story without access to the person at the center. He fans out to people around the figure in question, talking with relatives, neighbors, co-workers and employees, partners, opponents, officials, biographers, subject experts, scholars. He researches books and articles, financial statements, legal decisions, court documents and communications, until it’s possible to build the story accurately. Writing stories about the drug lord and business captain Joaquín “El Chapo” Guzmán is a case in point: “Cocaine Incorporated” starts in Los Angeles with El Chapo’s wife, Emma Colonel, delivering her twins, “a pair of heiresses,” and moves forward and backward in time to document the development of a nimble, opportunistic and global enterprise.

Sometimes Patrick’s interviews with individuals throughout a person’s world provoke a willingness to engage. In his story, “A Loaded Gun,” Patrick explores the story of Amy Bishop, an associate professor of biology at the University of Alabama in Huntsville who shot six colleagues, killing three, in February 2010. She had shot and killed her younger brother, Seth, at their Braintree, Massachusetts home in 1986, but was never charged with a crime by Braintree police. In the course of research Patrick talked with scores of people, including friends of Amy, Seth and their parents, about the Braintree incident. Ultimately, Amy’s mother and father came around. Amy’s mother, Judy, was present when her son was killed. Perhaps the Bishops grew progressively more interested in telling their own story, Patrick surmises. Finally, Amy herself reached out to Patrick, in a number of phone calls from the Tutweiler Prison for Women in Wetumpka, Alabama, where she is serving a life sentence.

When the subject of a story does agree to talk, Patrick’s task is to calibrate what he or she says, cross-check it, evaluate its veracity, and determine the degree of over- or understatement. Carl Ichan agreed to talk with Patrick, for instance, but insisted that everything he said was off the record.

Often, Patrick is interested in denial: individual denial, family denial, institutional denial. “How do you tease that out when you’re talking to somebody who’s actually invested in the denialist narrative?” The Harvey Weinstein story, which other New Yorker reporters broke this year, is an example of this dilemma. Denial was widespread, complex and has yet to be unpacked.

“The Loaded Gun,” Patrick feels, is, more than many others, a story about denial. He sees the tendency for compassion on the part of the Braintree police chief—feeling that Judy Bishop, having lost her son at the hands of her daughter, had suffered enough and they ought to leave well enough alone—as a totally human reflex, with disastrous results 24 years later. Regardless of evidence that’s hard to square with their conviction, the Bishops state assuredly that what happened to Seth in their kitchen was an accident. “I know. I was there,” Judy Bishop says.

Patrick was most eager, in researching “The Family That Built an Empire of Pain,” for Sackler family members to talk with him, but they refused. “I was pretty sure that they had a story to tell. Not because I think that they’re necessarily good, or that they don’t bear some real responsibility for the opioid epidemic, but more because I’m pretty sure that whatever they’re telling themselves, they believe. If there was ever a time to tell your story, if you have one, now is the time.” Perhaps they feel totally misunderstood, that the opioid epidemic is awful, but that it has nothing to do with them, Patrick muses. Perhaps they feel they set out to create something critically needed by patients, and the trajectory didn’t play out as they’d hoped. “But their reactions, when the first signs start coming that they may have created a monster, tweaking and revitalizing the marketing plan—I don’t think they reacted the way one would want them to,” says Patrick.

Immediately following the online release of “Carl Ichan’s Failed Raid on Washington,” either Ichan resigned and stepped away, or the White House fired him, depending on which source you believe. That confluence of events—months of research, exhaustive and broad-based interviews, the story’s online exposure of influence and corruption, and then the end of Ichan’s insider role—was both bracing and ultimately validating, according to Patrick. It felt like “a very concrete form of efficacy.”

“On the one hand, business is great for journalism and investigative journalism in particular,” Patrick says. “The New Yorker subscriptions have continued to increase since November 2016. On the other hand, in certain moments you wonder about the utility of it in a world in which people could just dismiss something as ‘fake news.’”

Writing for The New Yorker affords the luxury of enough time to thoroughly dig in and take the story wherever it goes. Patrick considers himself an empiricist. Free from the constraints and timetable of a quick turn-around column, he can talk to plenty of people, read “a ton,” dig up files and put pieces together. “The magazine has a reputation for veracity, for putting a ton of investment into every word. You have editors, copy editors, fact-checkers, in my case lawyers, also, poring over every detail. Both the White House and Ichan ran away from this pretty unholy relationship. I don’t know that it’s going to work out that way again with any of my pieces any time soon, but it was encouraging that it did.”