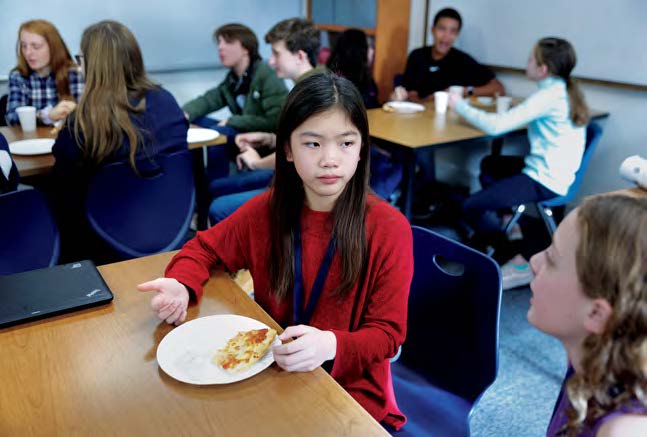 Every Wednesday around lunchtime, energetic Middle School students pack into a math classroom in the basement of Ware Hall, snag slices of pizza, and settle into clusters. After casual chatter dies down, the conversation turns considerably deeper, as the sixth, seventh and eighth graders tackle major social issues in a moderated discussion.

“It might seem like having these deep conversations with other Middle School students is a silly idea, but I’m always leaving CAFE (Cultural Awareness for Everyone) with new knowledge and understanding of others’ opinions. It’s taught me that there are multiple sides to every story, and almost nothing is black-and-white,” says Amelia, an eighth grader. “CAFE is a comfortable environment to talk about uncomfortable topics, which makes it easier to have difficult conversations in other, less-familiar environments.”

CAFE is a flagship in the Middle School’s programming on diversity, equity and inclusion. Students attend sessions voluntarily, with nearly a third of the Middle School population dropping in regularly. There they learn to listen to one another, debate issues and ask questions about topics that stymie even the most polished pundits. 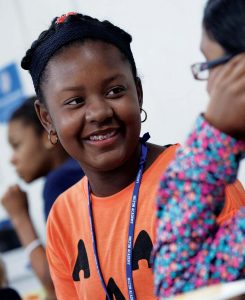 Topics range from immigration to race, from the aftermath of Hurricane Maria in Puerto Rico to gaming culture, from commercialism to cultural appropriation and national anthem protests. Faculty members Sue Austin and Carrie Ferrin select and present the issues without opinion or commentary. They moderate the conversation with questions that prompt students to react, discuss and debate among themselves.

“Students are learning so much about different cultures and becoming more fluent in the social identifiers [ability, age, ethnicity, gender, race, religion, sexual orientation and socioeconomic class], and we saw an opportunity,” Sue says. “We want everyone to be part of the conversation, because no matter how difficult it is, or how much we disagree, speaking with one another is valuable.”

Conversations in CAFE are inquisitive, respectful and sometimes challenging, but never heated, says Carrie. She and Sue often introduce topics by asking, “What do you know about this?” which prompts curiosity, rather than pontification.

“They listen to one another, and they are so amazingly respectful,” Carrie says. “They’re learning how to disagree, but in a way that keeps the conversation productive.”

Researching the topics requires listening to the students’ interests and finding age-appropriate context for provocative subjects—maturity levels and cultural competence vary broadly from sixth to eighth grade. While all the students may be interested in current events, Carrie says, many have only a surface-level understanding of a topic—or none at all—at the beginning of each session.

“There’s a lot of information out there, and they hear a lot of things, but they don’t always know the total picture of an issue,” she says. “That’s what CAFE brings to them.”

Student-led CAFE sessions have been some of the best. Any student who feels passionate about a subject is welcome to prepare a discussion. Ava McNeil ’22, now in Class IV, saw CAFE as an opportunity to share some of her research on black rights. She was able to speak about racial bias in policing and share her sadness and fear over its potential risks for people she loves.

“CAFE has encouraged me to listen to everyone speak their truth, and for me to do the same, even with difficult topics,” she says. “I chose to speak about treatment of black people, specifically by police officers. As a black student with a big family, it is a very important topic to me.”

Thatcher, a seventh grader, said CAFE has helped him differentiate between an argument and a fight. During a discussion about NFL players protesting police brutality, he recalled, students held strong and opposing opinions, but kept the talk civil.

“Saying what you want to say can be difficult,” he says. “Sometimes what you have in your mind comes out the wrong way. I’m learning to listen to others and not be afraid of voicing my own opinion. I have disagreed with other people at CAFE at times. Last year, I would hold
in my disagreement, because I didn’t want to start a full-on argument, but I’ve learned to have a healthy discussion when I disagree.”

One Wednesday last fall, the students discussed a migrant caravan of people from Honduras and Guatemala walking toward the United States’ southern border. A video interview with a 12-year-old boy who’d left his family in search of work, the danger of the journey and the boy’s separation from loved ones resonated among the younger students. Older students raised logistical and political questions.

“We have troops on the border now,” one eighth grader said. “What’s going to happen to the caravan when all these people get to America? Will they be hurt?”

Sue and Carrie want the students to leave CAFE with lingering questions. Serious, complicated topics are impossible to button up in less than an hour.

The open discussion format in CAFE successfully represents the Middle School’s effort to increase students’ social and cultural awareness, says Principal Nancy Anderson. This year, the Middle School launched the Common Ground Initiative: a unified curriculum to address social identifiers such as age, race, socioeconomic status and gender. Over the summer of 2018, faculty developed lesson plans around each of the eight social identifiers and have been teaching them throughout the academic year.

“The philosophy behind the initiative is that every child in the Middle School should, in some way, think about, participate in, and experience a common curriculum about social identifiers,” says Sonya Conway, Grade 6 dean and the Middle School’s chair of multiculturalism and community development.

“These discussions are amazing,” Sonya says. “We’re getting into topics and deeper, even sometimes uncomfortable, conversations I have never had before with sixth graders, in a structured way that feels safe for them to explore. They’re learning about themselves. They’re learning about others. I look at the national landscape, and some adults’ inability to engage in simple discourse, ask questions, present strong opinions, or just listen, and the kids are doing that here.”