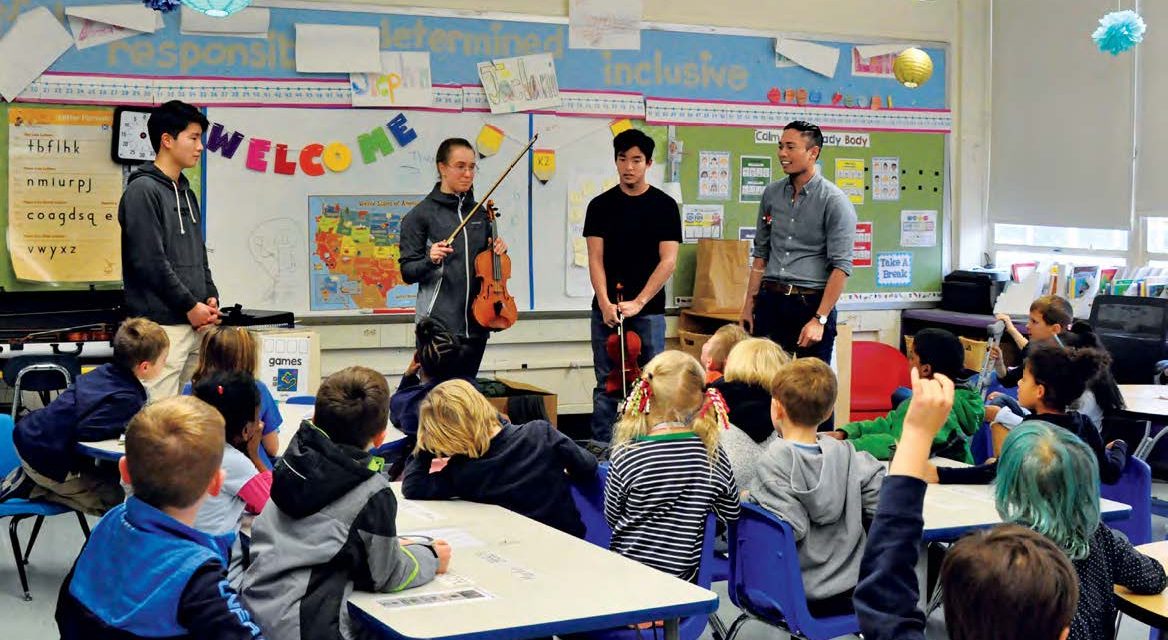 How do you get dozens of antsy 3- to 7-year-olds to pay attention to a classical music performance at the end of their school day? Simple: You let them conduct it.

This is how the kindergartners at Boston’s Dr. William Henderson Inclusion School ended up guiding Milton’s chamber musicians through the changing tempos of Bizet’s Farandole. Music department chair Adrian Anantawan was on hand to help the little maestros.

The performance and follow-up “instrument petting zoo” comprised the first encounter of what Adrian hopes will become an ongoing relationship between Milton and these public school students. Henderson, a K–12 school that spans two campuses in Dorchester, is a nationally recognized inclusion program. Thirty percent of Henderson students have a disability, whether physical or developmental; they attend classes alongside students with more typical development. Each classroom has both a special education and a general education teacher. 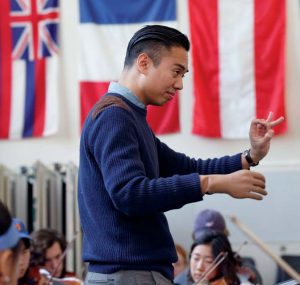 “We want to figure out ways to connect through music, because that language transcends so many cultural boundaries and socioeconomic differences and, in this case, builds a bridge between public and private institutions,” Adrian says.

Kindergartners performed a song for the visiting group during this first visit, and then Milton students played. Later they branched off into classrooms with children in Henderson’s after-school program. There, Milton musicians introduced the younger students to their instruments, demonstrating their different sounds and functions and allowing the children to touch and play each instrument.

“We want to plant the seeds of the idea that playing a musical instrument is this fun, accessible thing,” Adrian says.

Adrian has been in touch with a nonprofit called United Sound, whose mission is to use music as an intermediary between students with and without special needs. Through peer mentorship, the elementary school kids learn their instruments and ultimately perform with Milton orchestra members after a semester. Adrian hopes to use the United Sound curriculum as a starting point for a lasting partnership between the schools.

“It’s an opportunity for us to think about how we, in classical music or orchestral performance, have a group that reflects the diversity of the communities we live in,” he says.

The chamber orchestra raised about $7,000 to purchase instruments and adaptive musical technology, such as iPads, in December. Fundraising has gone through the VIBE (Voices, Instruments and Beats Enrichment) Program Inc., a nonprofit founded by Kat Stephan ’19. 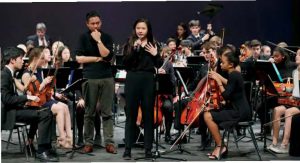 Kat founded VIBE as a freshman after she volunteered at a public charter school in Boston and learned that the school’s budget didn’t cover music education. Since VIBE’s beginning, Kat and other young musicians, including several Milton students, have played concerts to raise funds for underfunded music programs. VIBE musicians play at nursing homes and community events, where they ask for donations to their cause. Contributions have already paid for instruments at Boston’s Codman Academy and will benefit the Henderson students. VIBE raised a total of $8,850 in 2018.

“I’ve played the piano since I was 3, and the trumpet since I was 12,” Kat says. “Music has always been an important part of my life, and to see kids without the opportunity to learn, or even play the recorder, was a wake-up call.”

“It might sound cheesy, but music is universal,” she says. “We were playing with kids who didn’t always speak English, but a B note is a B note no matter where you are in the world. It’s a way to communicate without language.”

Adrian is hopeful that Milton can be a leader in broadening partnerships between typically developing students and those with disabilities, with the idea that “music belongs to everyone.” His goal is to ultimately create a nonprofit that supports such collaboration, and an orchestra that includes musicians of all abilities performing together.

The cost of instruments has been a barrier, and it can be especially prohibitive when a player with a disability needs an adaptive instrument. Adrian, an internationally renowned violinist who was born without a right hand, uses an adaptive bow to play. Several resources, Adrian says, can help supply instruments to low-income students.

Additionally, advances in technology have made it possible for musicians to produce the same sounds as traditional instruments without the physical instruments themselves. Adrian wants to tap into resources, such as the MIT Media Lab, that can increase access for music learners with disabilities.

“If a student who has cerebral palsy wants to play the violin but can’t physically hold the instrument, who’s to say they can’t really make music or produce a violin sound?” he says. “It’s not necessarily the physical tool that defines your ability to make music. It’s your will, and your ability to communicate in an artistic way, to express your emotions and your story.

“The key is not only access, but meaningful participation. Say, for instance, you’re playing the tuba or the triangle in an orchestra. You don’t play all the notes of a piece, but that’s not what’s important . . . . You’re giving what you can, contributing to something greater than yourself.”