The Importance of Being Seen 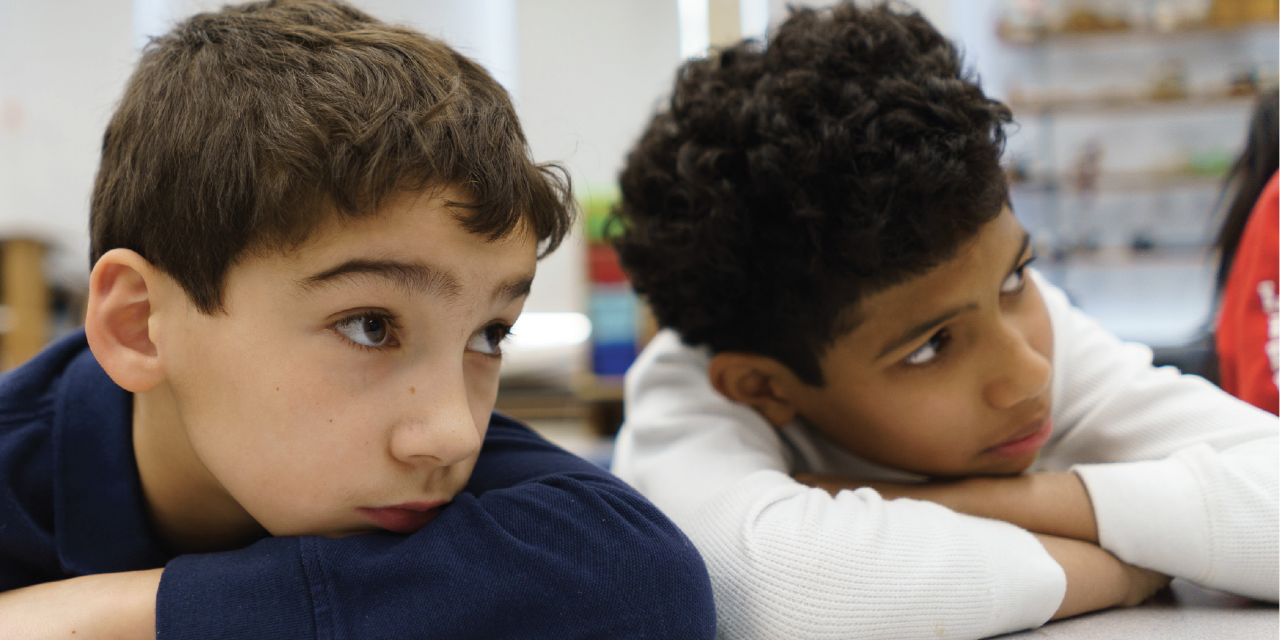 The unscripted moments of a Middle School day—a passing conversation in the hallway, a pickup game at recess, an “aha!” moment in robotics—are what make the experience special, according to Steven Bertozzi, principal of Milton’s Middle School.

Interviewed at the end of the spring semester,  leaders of the Middle and Lower Schools described their efforts to meet the nonacademic needs—social, emotional, and physical—of Milton students as the School began its remote-learning program in response to the novel coronavirus.

“One of the things I promise every parent is that we know our students,” Bertozzi said. “We know them as learners; we value those conversations between classes, the things that happen in advisories. We want to make them feel seen. That’s the promise I still want to provide: We will find ways to make sure that we are seeing your kids, even in this remote setting.”

Necessary measures taken to slow the spread of Covid-19 may have adverse effects on children’s mental health and well-being, the World Health Organization (WHO)cautioned in March. In addition to fears about the virus itself and the potential grief of losing loved ones, staying at home for long stretches of time removes children from critical social interaction.

“If schools have closed as part of necessary measures, then children may no longer have that sense of structure and stimulation that is provided by that environment, and now they have less opportunity to be with their friends and get that social support that is essential for good mental well-being,” the who advised. “Although all children are receptive to change, young children may find the changes that have taken place difficult to understand, and both young and older children may express irritability and anger. Children may find that they want to be closer to their parents, make more demands on them, and, in turn, some parents or caregivers may be under undue pressure themselves.”

The pressure on many parents to balance their own professional responsibilities with managing their children’s education became clear early on, said Frank Patti, principal of the Lower School. Younger students are more dependent on adults to keep up with daily work and progress, so Patti created a team of learning and reading specialists to support students throughout the school day.

To help parents and students adjust to such a sudden, significant change in routine, Patti established a series of webinars led by outside experts in parenting as well as in child and family psychology. The webinars were well received and kept open the lines of engagement between the School and families.

“We are still very much one community, so there was a driving force behind having those messages and activities geared for the entire School, rather than a specific grade level,” said Thadani, who is also an internal medicine physician. “Kids need structure and dependability, and their routines were upended abruptly, so we wanted to provide them with tools to manage their feelings and cope with stress.”

Both Thadani and Middle School counselor Nicci King anticipated some regression—emotionally and academically—when students returned in the fall after being off campus for at least six months. Playing is such an important part of the Lower School, Thadani noted; social distancing may not allow for the types of play to which students are accustomed, or even for hugs between friends.

“We’re going to really work to put them at ease, because this is a big adjustment,” she said.

Making sure that students had the ability to interact in fun, unstructured ways became important in the Middle School, said King. Teachers began hosting virtual lunches and recess, music trivia, and other activities—touchpoints that helped lend some sense of community to the days.

King stayed in touch, via one-on-one Zoom sessions, with the students she counsels regularly. “Many of the issues have stayed the same, but some have become mostly about remote learning,” she said. A few of the students with anxiety said they felt somewhat validated—now the rest of the world is learning to cope with the worries they’ve had all along.

“There are so many moving parts to this, but I think the Middle School is working really hard to make things as predictable as possible for the kids,” King said.

She put together Padlets—online bulletin boards organized by topic—for parents and students. The parent Padlet provided resources for parents to help their kids cope with the massive changes that came with the pandemic, while the students received tips on self-care and connecting with their families, activities to fight boredom, and ideas for remote community engagement and service.

Bertozzi surveyed each Middle-Schooler, asking, among other questions, whether students had a quiet place to work; whether they felt able to maintain connections with teachers and peers; whether they felt they were staying on track academically; and what highlights and challenges they faced. Some of the challenges were logistical—managing time and finding all the resources for each class—but many were emotional or social. The students felt stressed. The first few weeks of remote classes were overwhelming. They missed one another.

“Not being able to hug my friends,” one student listed as a challenge. “Even though Zoom is nice, it’s not the same as being in school together,” another wrote. Working without the company of classmates could be boring, someone said. An eighth grader wrote that she was staying in touch with close friends but missed interactions with students she wouldn’t ordinarily see outside school.

Many others stepped up to help: West and music teacher Alan Rodi started a sign-language club. Athletic Director Sam Landau created video workouts. And the students took it upon themselves to help their peers. Some, remembering their experiences arriving at the Middle School, initiated efforts to create a welcome video and offer advice to Grade 5 students and parents as they got ready to start in a new division.

They also honored important social and cultural milestones, such as the Day of Silence in support of the lgbtq+ community—organizing and coordinating with teachers to make it a meaningful day despite the remote environment.

“We have seen a lot of kids rise up and look for leadership opportunities in many new and creative ways that even the adults hadn’t thought about, which has been incredible to see,” Bertozzi said. “And so many of those leadership opportunities they’re looking for have shown what they value in the School, and the community they’ve created, even remotely.”